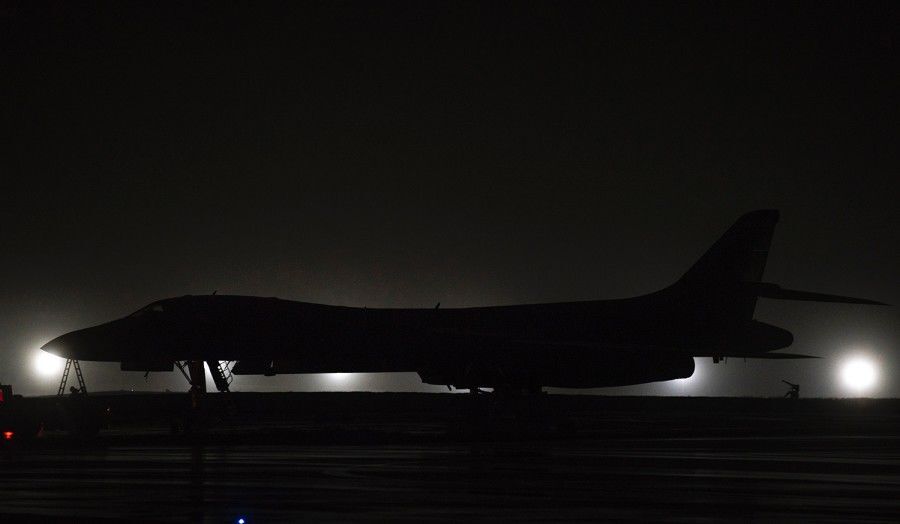 The deployment comes following the quiet withdrawal of five B-52 nuclear-capable Stratofortress bombers from Guam to the US mainland in mid-April, which temporarily froze the Pentagon’s 16-year-long ‘Continuous Bomber Presence’ mission on the Pacific island.

The US Air Force has transferred four B-1B Lancer conventional strike bombers and a complement of about 200 airmen from a base in Texas to the Andersen Air Force Base on the island of Guam, US Pacific Air Forces (PACAF) has confirmed.

The deployment, described as a temporary one, comes amid growing tensions between Beijing and Washington, both in the South China Sea territorial dispute, and the back and forth claims about who’s responsible for the global coronavirus crisis. Last week, Beijing reported “expelling” the USS Barry, a US guided-missile destroyer, out of waters in the South China Sea after shadowing it from an island chain contested by China and Vietnam.

The Pentagon did not disclose exactly how long the bombers were expected to remain on the island. The B-1s from the group are ordinarily based at the Dyess Air Force Base in Texas.

The US pulled a group of B-52 strategic bombers out of Guam on April 17. In the weeks that followed Pentagon sent B-1s to the region, flying a pair of the planes to South China Sea and back to base in South Dakota late last month. Also in April, the Air Force sent two B-1s to Japan for training.

Hinting at the purpose of the Guam deployment, PACAF chief of operations force management Lt. Col Frank Welton boasted that the B-1 was capable of carrying the Long Range Anti-Surface Cruise Missile (LRASM), “giving it an advanced stand-off, counter-ship capability.” The officer did not mention just whose warships these precision-guided missiles would target in case of conflict.

Carl Schuster, former director of Pacific Command’s Joint Intelligence Centre, told CNN that the bombers’ deployment was designed to “complicate any bad actors’ decision-making assumptions.” However, RAND Corporation senior researcher Timothy Heath suggested the bombers’ deployment at Guam leaves them vulnerable. “A planner in China’s military could have easily plotted ways of destroying the bombers due to their well-known presence,” he said.

The B-1 Guam deployment is the first of its kind since 2017, when the bombers were flown to Japan and South Korea amid tensions with North Korea over its nuclear programme.

Introduced in the mid-1980s, the Rockwell B-1 Lancer was initially designed as a nuclear-capable heavy bomber. After the Cold War, the bombers were refitted for a conventional role, carrying up to 50,000 pounds (23,000 kg) of bombs and missiles on its external hard points, or 75,000 pounds of bombs and missiles in its internal bomb bays. In addition to the LRASM, the bomber is capable of carrying the AGM-154 Joint Standoff Weapon glide bomb, and the AGM-158 Joint Air to Surface Standoff Missile.

China has yet to comment on the Guam B-1 deployment, but has blasted the US last week over what it called its “militarization of the South China Sea,” and “trouble-maker” behaviour. “The [People’s Liberation Army] will remain on high alert, and adamantly safeguard national sovereignty, security and development interests, as well as peace and prosperity of the region,” Chinese Defence Ministry spokesperson Col. Wu Qian said last week following the encounter between Chinese and US warships.

'Once Upon a Virus': China Releases a Bizarre Lego-Like Cartoon Mocking US COVID-19 Response

Anti-China Stance Will Be There Whoever Rises to Power in US Presidential Vote, Analysts Suggest