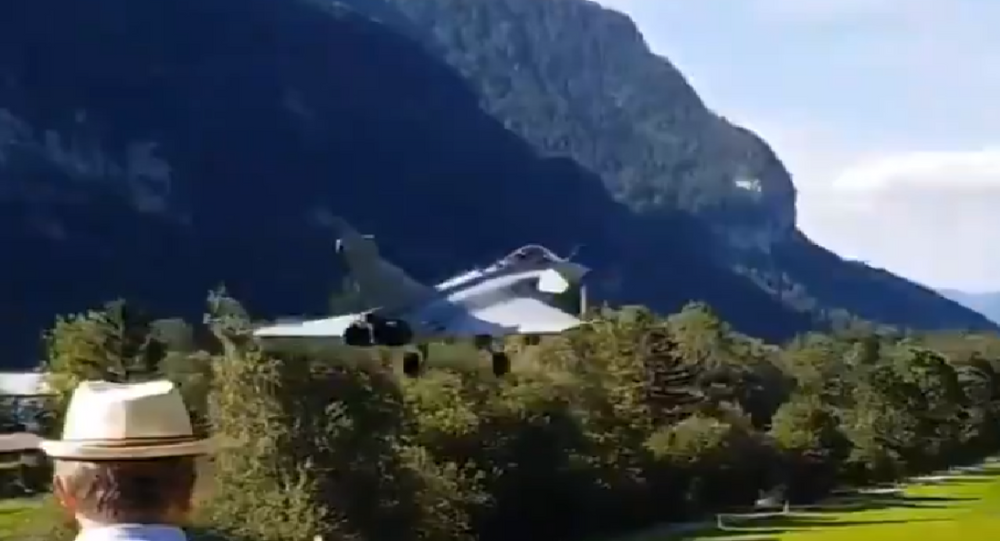 Last year, the Mollis Zigermeet airshow in Switzerland demonstrated the capabilities of a series of aircraft in a visual spectacle with a scenic mountain backdrop. New videos of an impressive landing have emerged since, demonstrating the pilot's skills.

Footage has emerged on Friday of a French Air Force Rafale conducting a stunning landing at Mollis Airport in Switzerland during an air display last year.

The video from ARithner Photography, shows the jet dropping like a stone in front of a mountainous backdrop. The pilot shoots across the trees and transforms the performance into a stylised landing as onlookers gaze on in applause.

That approach and then brick one baby!!! AWESOME .
Fantastic video @axalppro pic.twitter.com/1ezt5ojw81

​The demonstration comes from the August 2019 Mollis Zigermeet airshow in which the pair of French Rafales, the event's prime attraction, performed aerobatic routines above the valley in the northeast edge of the Swiss Alps, according to The Drive.

Among the aircraft trying for the Air 2030 tending is the Rafale, competing with Boeing's F-18E/F Super Hornet, the Eurofighter Typhoon, and the Lockheed Martin F-35A Joint Strike Fighter.

The light single-engine multirole fighter, Saab Gripen E was reportedly also being considered, although it did not take part in the show. A public vote rejected a proposed purchase of the Gripen Es as replacements for its F-5s and F/A-18s, after it was considered by the Swiss government in 2014, The Drive reported.

A final decision determining the victor of the Air 2030 competition will be made later this year or early next year. If the result goes their way, the Rafales may become a more common sight in Swiss skies, in both performances and as a conventional-use military aircraft.