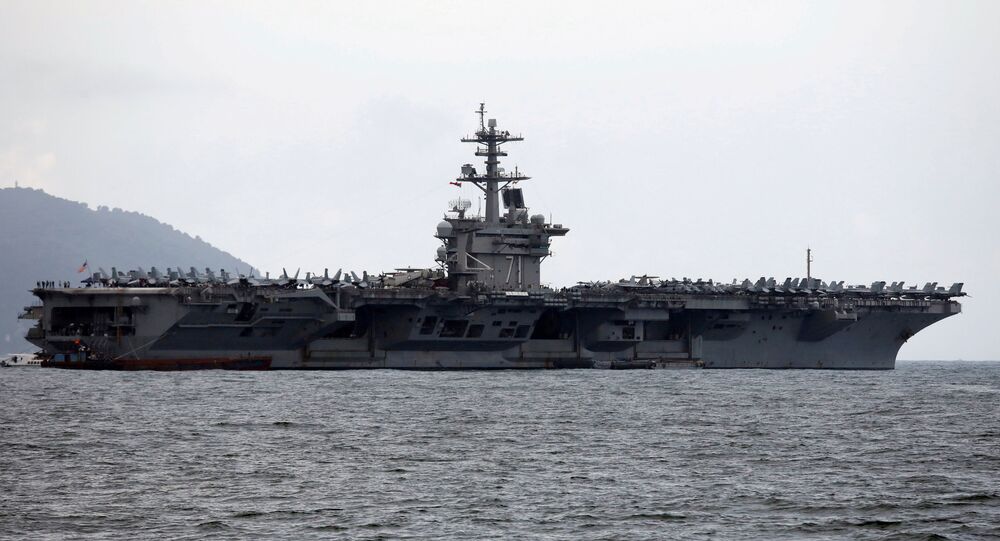 The American aircraft carrier has become one of the biggest epicentres of the pandemic among the US military. The incident also sparked a series of scandals following a request by the vessel’s captain for assistance in evacuating affected crew members was published.

The previous theory explaining the origins of the coronavirus outbreak onboard the USS Theodore Roosevelt aircraft carrier has recently been questioned by the US military as new evidence suggests the disease was brought to the ship by visiting flight crews and not by sailors after visiting Vietnam, The Wall Street Journal reported citing sources. According to the media outlet, this new version of events has not been proven either, with the military still uncertain as to how the crew became infected.

According to the new report, the ship received deliveries via flights from Japan, the Philippines, and Vietnam, all of them affected by the pandemic at the time, weeks prior to 24 March when the first cases of COVID-19 were detected among crew members.

© AFP 2021 / ANTHONY J. RIVERA
This US Navy photo obtained April 11, 2018 shows The aircraft carrier USS Theodore Roosevelt (CVN 71) leading a formation of US and Republic of Singapore navy ships during a photo exercise in the South China Sea on April 6, 2018

The previous theory suggested that the sailors could have contracted the virus during the ship's stay at the port of Da Nang in Vietnam, when the country had 16 confirmed COVID-19 cases, all of them in Hanoi. Some of the Theodore Roosevelt's sailors reportedly visited a hotel in Da Nang, where two other people, who later tested positive, stayed at the same time. While this initially led the military to believe this to be the cause of the outbreak, it turned out that these sailors tested negative for the virus, the media outlet said.

The fact that the first positive tests for COVID-19 in eight sailors came more than two weeks after their visit to Da Nang also reportedly cast a shadow over the old version of the outbreak's origin. Studies have shown that the coronavirus incubation period does not usually exceed two weeks.

By the time the aircraft carrier anchored in Guam for quarantine hundreds of its sailors were infected with the number reaching 615 by 15 April. In an attempt to save his crew, the carrier's captain Brett Crozier drafted and sent a letter to the Pentagon requesting the immediate evacuation of the infected sailors to a proper hospital.

However, his letter ended up in the press sparking a scandal that resulted in then Navy chief Thomas Modly firing Crozier. He later defended his move before the carrier's crew and said that the letter was a "betrayal", pointing out that Crozier should have suspected that it could end up in the hands of media and hence was either naïve to send it or leaked it on purpose. Modly, who faced pressure in the US Congress over his speech to the sailors, has since also resigned.