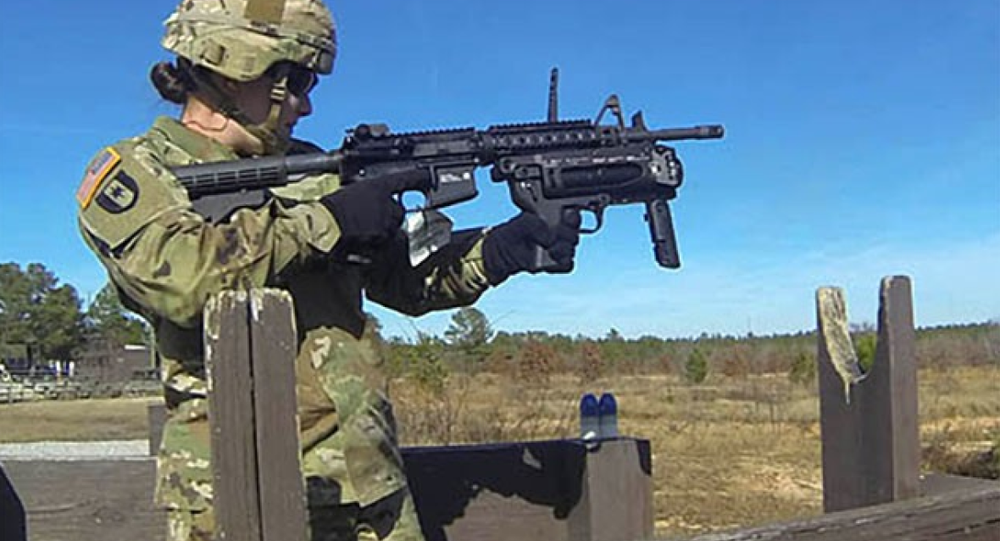 The US Army Research Laboratory’s latest bizarre invention is a small reconnaissance drone soldiers can put into the air using a 40-millimeter grenade launcher.

Sputnik has previously reported on the US Army developing a grenade-slinging drone, but what about a drone-slinging grenade launcher? Turns out, the Army has one of those, too. Enter: the Grenade Launched Unmanned Aerial System (GLUAS), an intelligence-gathering aircraft deployed from an M320A1 grenade launcher.

“In battle, there are multiple scenarios of when Soldiers would use this technology,” John Gerdes, a mechanical engineer with the Army Research Laboratory, said in a Wednesday news release. “How it’s used depends on which theater they’re operating in.”

GLUAS comes in two variants, one with folding paragliding wings and propellers and one with vertical helicopter rotors.

The tiny drone has a camera on the bottom that provides a video feed to a ground station below, and can be driven by either a joystick or handheld device. It can fly for up to 90 minutes and reach altitudes of up to 2,000 feet, according to the Army.

The Army made its patent application for the GLUAS public last month, including a concept image of the device suggesting it uses a parachute to remain aloft. No details have been released about contracts for supplying the Army with a test model.

“This device provides an autonomy and intelligence platform to help Soldiers perform useful missions while having a lookout from hundreds of feet in the air,” Gerdes said. “This integrates modern types of intelligence.”

“Things like GPS receivers and flight controllers are very feasible to install [onto the GLUAS], which makes it easy to maintain a position or follow a ground unit. Basically, if there is something you want to look at, but you have no idea where it is yet, that’s where the drone comes in,” the scientist further noted.

The Army has already deployed another miniature drone that aims at providing similar intelligence functions, although it has a significantly less dramatic launch method. The pint-sized Black Hornet Personal Reconnaissance System, barely the size of a house mouse, began flying around Afghanistan’s battlefields last July. The tiny helicopter takes less than two minutes to deploy and has a range of intelligence functions.