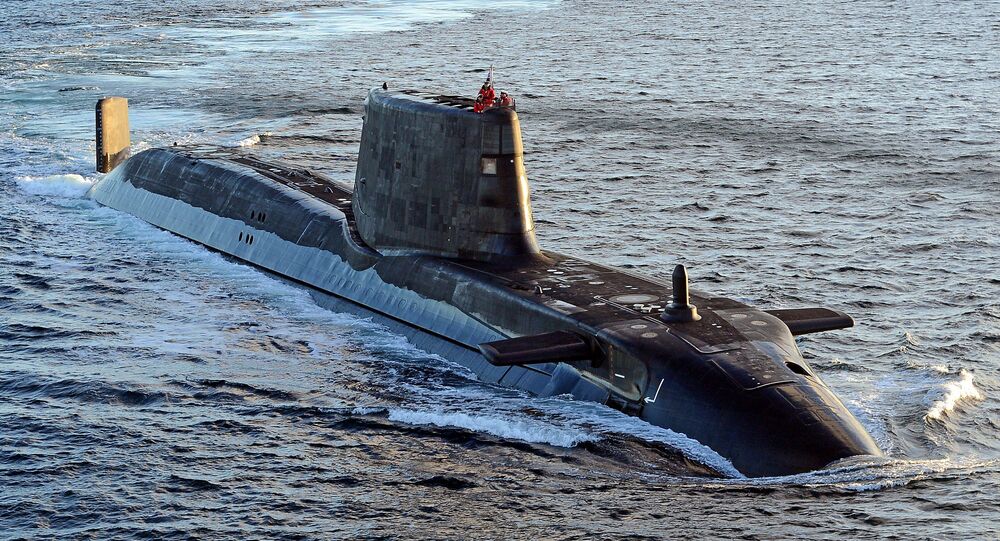 Images taken on 7 April showed the HMS Audacious submarine departing Barrow-in-Furness, Cumbria, on a brief maiden voyage to Naval Base Clyde, with Permanent Secretary of the Ministry of Defence Sir Stephen Lovegrove lauding the defence industry’s effort during the difficulties the country is facing amid the coronavirus pandemic.

The HMS Audacious made a brief inaugural voyage on 7 April, from Barrow-in-Furness, Cumbria, where it was built by BAE Systems, to Naval Base Clyde, home of the UK's Submarine Service.

​The attack vessel is 320ft long and weighs 7,400 tonnes, but is able to glide more silently than other subs due to its 39,000 anti-acoustic tiles. HMS Audacious has a total displacement of 7,800 t and can sail at a maximum speed of more than 30 knots.

​The vessel is armed with spearfish heavy torpedoes and subsonic Tomahawk cruise missiles that can hit targets more than 1,000 miles way, and can launch Special Boat Service teams from underwater.

Despite #COVID19 crisis and after many months delay, today HMS Audacious was moved out of Devonshire Dock & down to Walney Channel ready to begin initial sea trials on Monday @BAES_Maritime

​The sub is able to circumnavigate the globe without needing to resurface due to on-board nuclear reactors that create air and water, and boasts a state-of-the-art sonar system rendering it capable of detecting ships from 3,000 nautical miles away.

The first three Astute-class submarines – the HMS Astute, HMS Ambush and HMS Artful – are already in service, with HMS Audacious becoming the fourth out of a series of seven planned, as the following ones are in various stages of construction.

© AP Photo / Owen Humphreys
HMS Audacious, the fourth Astute-class nuclear-powered submarine of the Royal Navy, is taken out of the indoor ship building complex at BAE Systems, Burrow-in-Furness, England, Thursday April 27, 2017. HMS Audacious is due to be launched later in 2017.

“The departure of HMS Audacious from Barrow is a milestone in the Astute-class programme. The delivery of our incredibly complex submarine programmes depends on the skilled workforce and close collaboration with our industrial partners to deliver a first-class product for the Royal Navy. I am extremely grateful to everyone involved in the significant efforts to meet this milestone and the key roles they have played in the shadow of these unprecedented circumstances to get HMS Audacious to sea.”

“This is an incredibly difficult time for employees, their families and the community. But, as is often the case in times of great adversity, it has been truly humbling to see everyone come together to support the Government's critical defence programmes and help deliver HMS Audacious.”

Earlier, as he offered an update on the COVID-19 situation, the Permanent Secretary of the Ministry of Defence, Sir Stephen Lovegrove, thanked the defence industry for the “dedication and sacrifice” to ensure “the country continues to be kept safe” during the difficult times as the country remains in lockdown in a bid to contain the escalating coronavirus pandemic sweeping across the globe.