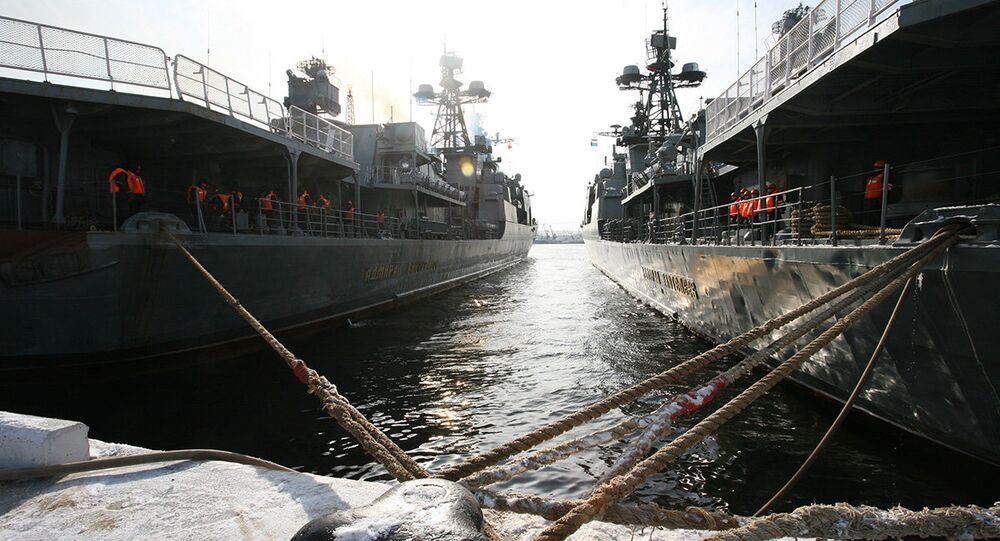 Russian Pacific Fleet Warships and Vessels Head for Drills in Sea of Japan, Sea of Okhotsk

Earlier in March, the Russian Pacific Fleet formed two new anti-submarine warfare strike groups, with the vessels to be tasked with helping protect the Russian Far East region’s maritime communications, patrolling the areas assigned to them, and taking part in missions abroad.

About 30 warships and vessels of the Russian Pacific Fleet have left port to embark upon tactical exercises in the Sea of Japan and the Sea of Okhotsk, according to the fleet's spokesman Nikolai Voskresensky.
In accordance with the combat training plan, under the guidance of general commanding officers, personnel will have to show their practical combat mission skills in dozens of scenarios, with task force readiness evaluated in maneuvers as part of tactical groups, according to the spokesman.
According to the drill plan, up to 15 warships and boats, 12 support vessels, and some 20 planes and helicopters are involved in the exercises in the waters of the Sea of Japan and the Sea of Okhotsk.

Earlier in March, the Russian Defence Ministry’s press service announced that the Russian Pacific Fleet, which in recent years has been extensively modernising its capabilities, was forming two new anti-submarine warfare strike groups, which would be tasked with searching for potential enemy submarines.

The groups will be tasked with aiding in the protection of the Russian Far East region’s maritime communications and patrolling the areas assigned to them.

The strike groups will also be taking part in missions abroad.