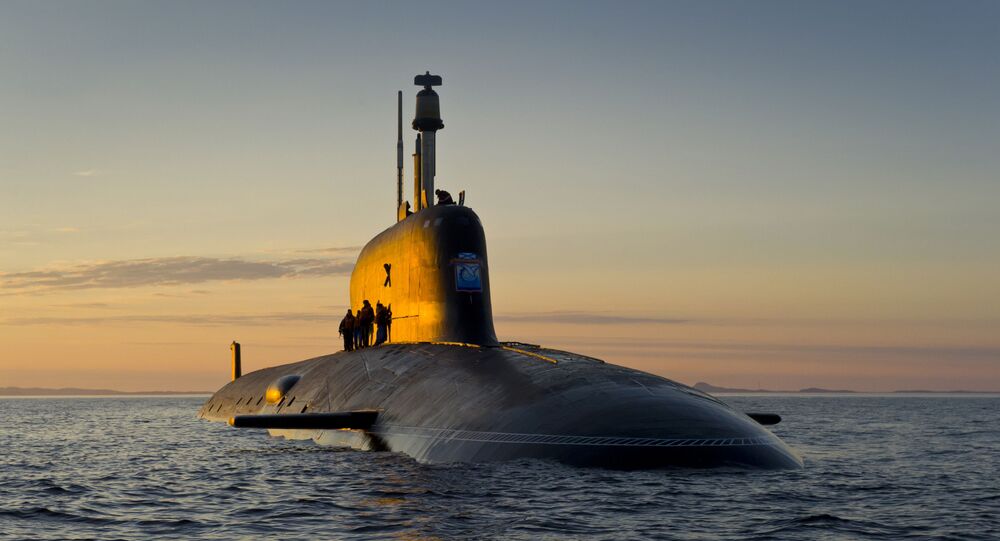 The K-560 Severodvinsk, a Yasen-class nuclear-powered attack submarine armed with anti-ship and land attack cruise missiles, will soon be equipped to carry the Zircon, a new scramjet-powered maneuverable anti-ship missile capable of accelerating to speeds of up to 11,100 km per hour.

Earlier this year, in an article on the most fearsome missile submarines in the world, National Interest magazine listed the Yasen class of cruise missile submarines as a “threat to the US homeland,” owing to their “extremely quiet” operation, fast speed, “extremely potent sensors,” and, most importantly – their deadly payload – “32 dual nuclear/conventional capable 3M-14K Kalibr cruise missiles that have a range of over 2,500 kilometers.”

That, NI calculated, means that Yasen-class subs, including the Severodvinsk and her sister ship, the Kazan, “could easily close to 2,000 km off the American east coast and strike inland as far as the Great Lakes. Indeed, if the vessel…[could] close to within 1,000 km or less, it could strike as far inland as Chicago or even St. Louis.”

Fortunately for St. Louis, Russia’s nuclear doctrine remains unchanged: Moscow will not carry out a preemptive nuclear strike under any circumstances, and will use its nuclear arsenal only as a last resort in the event of an enemy first strike, or in response to large-scale conventional aggression.

But back to the Severodvinsk. What does the submarine's interior look like? What are the crew conditions like? What does its captain consider to be his boat's main purpose? Sputnik gets an inside look.

Beyond a series of hatches and ladders, is the control room, where sailors monitor a series of computer screens which serve as the sub’s “brain.”

“Our main mission is the protection of strategic missile subs which keep those in the distant frontier at bay,” Captain First Rank Roman Sanatarchuk, the submarine’s commander, says. “We ensure their combat survivability. Using the analogy of aircraft, they are the heavy bombers, while we’re fighters and attack aircraft rolled up into one. If the enemy dares to bare his teeth, we can approach and carry out strikes with our precision weapons – Kalibr cruise missiles.”

The Kalibr – a class of Russian surface ship-, submarine- and air-launched anti-ship, anti-sub and land attack cruise missiles, made its debut in 2015, when ships from Russia’s small but deadly Caspian Flotilla launched dozens of the missiles at terrorist targets over 1,500 km away in Syria. Since then, the weapons were used several more times, launched from both surface vessels and submarines, including the Severodvinsk.

‘They Fear Us for a Reason’

Sanatarchuk says hiding from NATO’s prying eyes and ears is becoming more difficult with each passing year, with the NATO alliance improving its vast anti-submarine surveillance network, and US Navy Boeing P-8 Poseidon patrol planes taking off from Norwegian airfields to hunt for Russian subs. Fortunately, the Western alliance is still largely unfamiliar with the characteristics of Yasen-class submarines, forcing them to pay special attention. “They fear us for a reason,” the commander notes.

“This boat has very low noise characteristics, much lower than most foreign analogues. Its cruise missiles allow it to operate from big distances, with potential targets detected long before they can detect us. Furthermore, the boat will soon be modernized to carry hypersonic missiles. This will greatly expand its capabilities,” Sanatarchuk explains.

Sanatarchuk, 39, has almost two decades of service under his belt, starting his career aboard a Project 671RTM Schuka-class nuclear attack sub, and serving aboard a Project 949A Antey cruise missile submarine. Compared to those two boats, the Yasen class has a number of improvements, including more automated systems and electronics, more comfortable living conditions, and improved survivability, including a specially-designed rescue pod carried in the sail in case something goes wrong.

© Sputnik / Pavel Lvov
A cabin is pictured aboard K-560 Severodvinsk nuclear submarine at Zapadnaya Litsa naval base some 100 kilometers north of Murmansk, Russia

As with all vessels of its kind, the Severodvinsk’s crew’s daily routine includes drilling survivability into sailors’ blood. Emergency response drills to patch up holes or put out a fire take place almost daily.

“This is a military vessel, and that means eliminating damage is something that we pay special attention to,” Chief Petty Officer Maxim Gripich explains. “The area of water intake is usually announced by speakerphone, and emergency team arrives immediately. We start fighting for survivability. This is the main task of the entire crew, regardless of position. I’m the ship’s electrical technician, but if an accident takes place my responsibility is saving the ship and its crew.”

In recent weeks, governments around the world have confronted the risk of the new coronavirus. On a submarine, owing to its cramped quarters and recirculated air, the spread of a virus like COVID-19 could be deadly for the entire vessel. But the Severodvinsk has a contingency for this: a special isolation ward with a separate cabin.

“At the moment, I live here,” Severodvinsk Medical Service Chief Dmitri Babanov says. “If needed, I’ll free the quarters for the patient, and take his place.” The sub has all the necessary equipment on board for diagnosis and treatment, including an X-ray machine, and electrocardiograph, defibrillator, and decompression kit to treat carbon monoxide poisoning.

“Thankfully, we don’t have coronavirus here,” the doctor jokes. “Apparently it freezes at these high latitudes.”

Months in the Depths

Beating in the Severodvinsk’s bowels is its atomic heart, whose 250,000 horsepower capacity allows for the 13,800 tonne, 139 meter-long submarine to accelerate to speeds of up to 31 knots (57 km) per hour. With an unlimited range, and endurance limited only by food and maintenance requirements. Because of this, Sanatarchuk’s boat spends long periods at sea, deploying for about 150 days in the last year.

The massive, spherical antenna at the front of the boat, large and powerful enough to comfortably ‘see’ and ‘hear’ its surrounding environment, required the sub’s torpedo tubes to be transferred from the nose to the second compartment – an unprecedented engineering solution in Russian submarine construction. Along with Kalibrs, the sub can be fitted with the Onyx-class of anti-ship missiles.

But despite its impressive firepower, unlimited range and stealthy characteristics, the key to the submarine's operational effectiveness is always its crew.

“Toward the end of a deployment you can usually feel the tension in the air. During free time, we try to defuse tension; we arrange all kinds of harmless practical jokes. For example, we might send a fresh sailor to some far-off compartment, supposedly to get a photofluorography. He’ll spend half a day searching, but return empty-handed. This is a kind of benign sea humour. Everyone smiles and the mood improves,” Sanatarchuk explains.

For long journeys, cabins are equipped with televisions and a digital collection of films.

Sailors are fed four times a day, including multiple courses and a hundred grams of dry red wine for lunch. “For breakfast we alternate – porridge, tea, coffee, cottage cheese, sandwiches with cheese and sausage. We brew the coffee ourselves. When we go out to sea, evening tea is added to the ration, and we start cooking pastries – pies, pizza, blintzes and pancake,” ship cook able seaman Fanur Gazizullin says.

The unique opportunity to visit the Severodvinsk was provided to journalist Andrei Stanavov.