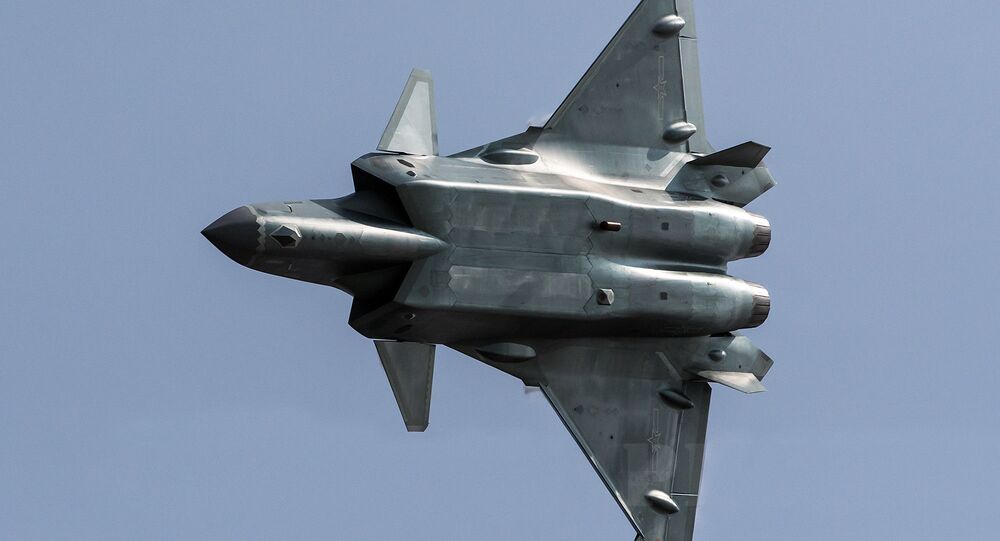 The fifth-generation Chinese Chengdu J-20 stealth fighter, which entered service in 2017, is touted in China as a warplane capable of getting the better of the sophisticated US F-22 Raptor.

In an article for The National Interest on Thursday, the US magazine’s contributor Mark Episkopos focused on the advanced armaments of the Chinese stealth fighter J-20, which he claimed may help it “dominate America's [state-of-the-art] F-35 [warplane]”.

The author recalled that among other things, the J-20 is armed with four long-range PL-15 missiles, which are equipped with active electronically scanned radars and feature a reported maximum range of up to 300 kilometres.

Episkopos claimed that the PL-15’s “impressive specifications place it in the ranks of the top air-to-air missiles along with the European Meteor missile and Russian K-37M”.

According to him, the Chinese missile’s range is much higher than that of the US-made AIM-120 AMRAAM (Advanced Medium-Range Air-to-Air Missile) counterpart, which is estimated to be 180 kilometres or less.

“The American F-22 and F-35 fighters are now equipped with the latest AIM 120-D missiles, but a massive range deficit remains nonetheless. The challenge of the PL-15 comes on the heels of questions about the uncertain future of the aging AMRAAM system”, Episkopos noted.

In this context, he cited US Army Captain James Stoneman as saying in an interview with The National Interest that currently, “there is no program of record for a follow-on” and that the US military is “probably close to maxing it out”.

Episkopos added that as for the PL-10, it may be called “China’s response” to the short-range AIM-9X Block II Sidewinder missiles that the US sells to Taiwan.

“It is a bigger long-term concern”, the author goes on to say, that both the PL-10 and the PL-15 are “reportedly built with the latest anti-jamming technology at a time when the AIM-9X and AIM-120D are perceived as increasingly vulnerable to modern digital radio frequency memory (DRFM) jamming techniques”.

He concludes the piece by pointing out that with many details about the J-20’s characteristics “still unknown”, “the juxtaposition of the PL-15 and PL-10 inside the J-20’s frame can become a stark concern for the United States and some of its regional allies who continue to rely on aging AMRAAM technology”.

Has China's J-20 Stealth Fighter Been Spotted at a US Airbase? (PHOTO)