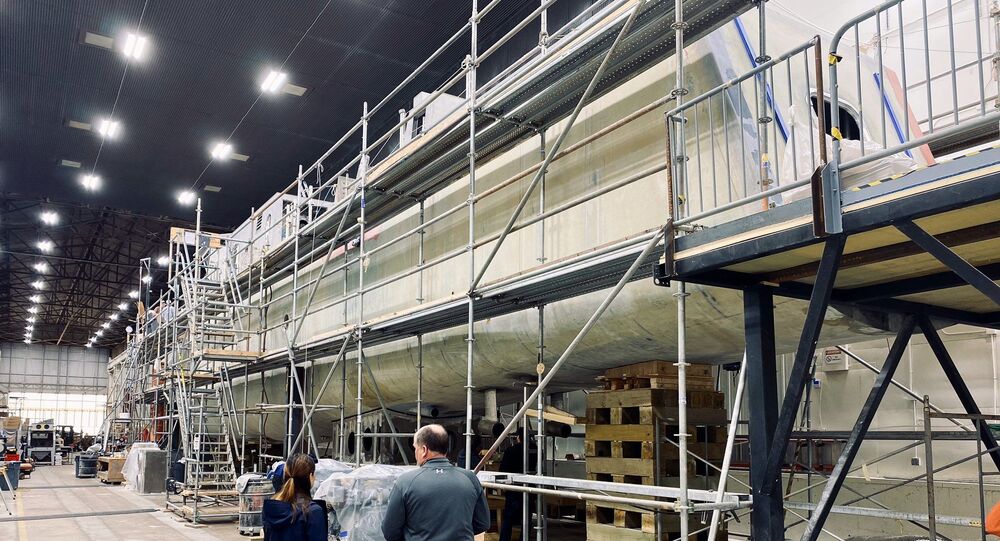 The US Navy has awarded Leidos, a Lockheed Martin subsidiary, a $35.5 million contract to build the Sea Hunter II - an unmanned, anti-submarine, surface vessel designed to traverse open waters without a human crew.

The US Navy recently allowed, for the first time, media representatives to enter the closed facility of Gulfport, Mississippi, to watch the construction process of the Navy's second drone warship, the Sea Hunter II.

“Right now we are about six months from the water [...] This long and skinny hull means it will cut through the water with less drag and be able to stay out at sea for a long time”, according to Barry Dreyfus, CEO of United States Marine Inc., cited by CNBC.

According to the media report, the Sea Hunter II deck - like its predecessor - is clear of handrails and ladders. Below deck, computers and neatly-layered cables take the place of mess areas, heads and galley.

"Everything has to be completely automated and redundant because there is nobody on board to fix it”, Dan Brintzinghoffer, vice president of maritime business development at Leidos, said, cited by CNBC.

Despite the presentation for the media of the Sea Hunter II construction works, the US Navy does not disclose what missions it envisions for its cutting-edge vessels.

“They may carry weapons one day, that’s a choice the Navy will have to make, their value is out there and being widely distributed in large numbers, they have to go off by themselves and in harsh, unpredicted [sic] environments, they have to sense and make decisions”, said Rear Adm. Nevin Carr, vice president and US Navy senior account executive at Leidos, cited by CNBC.

DARPA
DARPA Hands Over Unmanned ‘Sea Hunter’ to US Navy (VIDEO)
The Defence Advanced Research Projects Agency (DARPA) has developed a concept at the Pentagon's request for the new unmanned vessel. The US military task was according to official statements, 'colossal'. Engineers are developing a warship capable of hunting submarines, detecting torpedoes and avoiding objects at sea while traveling at speeds of at least 27 knots (51 km/h or 31 m/h).

Leidos tested a 132-foot (40-meter) twin-screw first-generation Sea Hunter trimaran in 2016. The robotic vessel is designed to travel in open seas for months at a time without crew, but with 24/7 remote human supervision.