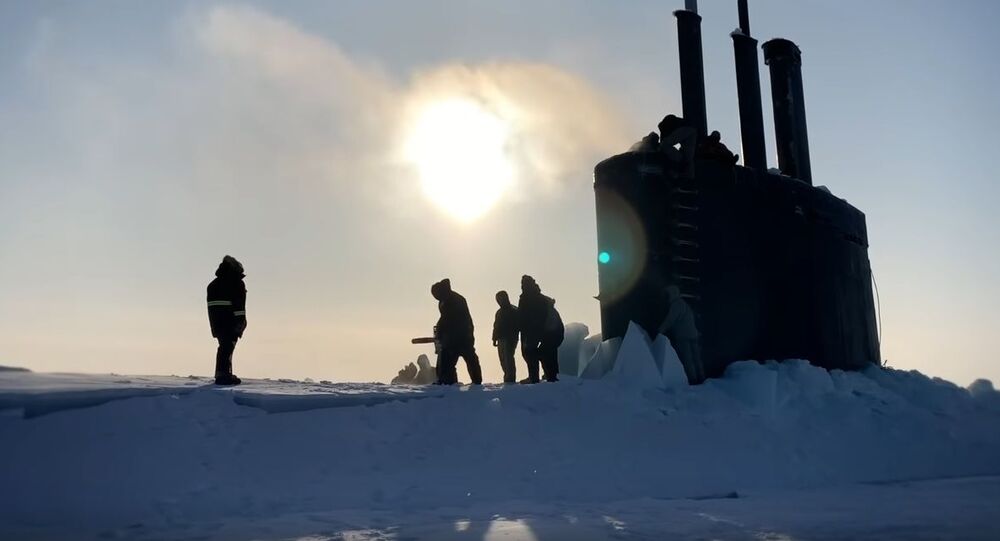 The US Navy kicked off its biennial Ice Exercise (ICEX) 2020 drills in the Arctic Ocean last week, with the three-week-long drills involving a pair of fast-attack submarines operating in the strategic corridor.

The US Navy has released footage showing off the USS Toledo Los-Angeles-class nuclear-powered attack submarine crashing through thick Arctic ice, with the vessel’s sail shown slowly coming up over the surrounding ice at Ice Camp Seadragon, a temporary encampment established on an ice floe in the area. Footage then shows chainsaw-armed sailors emerging to clear the surrounding ice.

Commenting on the spectacle, Admiral (ret.) Viktor Kravchenko a veteran of Soviet and Russian submarine forces, and former commander of the 14th Submarine Division and the Russian Black Sea Fleet, said the feat was a difficult but long-mastered operation.

“Well, the sub surfaced…There’s nothing extraordinary about this. We mastered this technique a long time ago,” Kravchenko said in an interview.

#ICEX2020 continues this week in the #ArcticOcean! The three-week biennial exercise offers the #USNavy the opportunity to assess its operational readiness and train with other services, partner nations and Allies to increase experience in the region.@COMSUBLANT @PacificSubs pic.twitter.com/5gjl5Q5q9A

According to the retired admiral, the Russian Navy should work to find new technical methods to find ways to monitor US subs even as they float under the ice. At the same time, he suggested, efforts should be made to track them before they ever get a chance to dive under the ice.

The video went viral online, attracting nearly 300,000 views as of this writing. However, not everyone seem impressed, with some conspiracy-minded users claiming the clip was staged.

“Stop…Why isn’t the video shown from the beginning, it looks like the ice was prepared (chopped) to leave the snorkel and antenna undamaged,” one user argued. “A miserable semblance of Russian submarines. In the 70s, Russians made surfacing from under the ice much more powerful and elegant,” another chimed in. “Fake news! Who is the cameraman?” another joked.

The USS Toledo joined the USS Connecticut, a Seawolf-class fast-attack submarine, for three weeks of grueling Arctic drills last week, with the vessels expected to perform transit and other training to increase sailors’ experience and operational readiness.

“The Arctic is a potential strategic corridor – between Indo-Pacific, Europe, and the US homeland – for expanded competition,” US Navy Submarine Forces commander Vice Adm. Daryl Caudle said in a Navy press statement. “ICEX 2020 provides the opportunity for the Submarine Force to demonstrate combat and tactical readiness for sustained Arctic operations in the unique and challenging Arctic environment,” he added.

The US and the Soviet Union (and later Russia) were the first navies in the world to create submarines capable of breaking through thick Arctic ice, with the American USS Skate nuclear-powered attack submarine becoming the first to surface at the North Pole in March 1959.  In September 1963, the K-178, a Soviet nuclear missile sub, carried out the first-ever ice-breaking Transarctic passage with ballistic missiles onboard. In the years that followed, the two countries made ice-breaking voyages a routine part of training, with Soviet engineers even making the hull of the massive 175 meter-long, 48,000 tonne Akula-class ballistic subs strong enough to operate in Arctic ice.