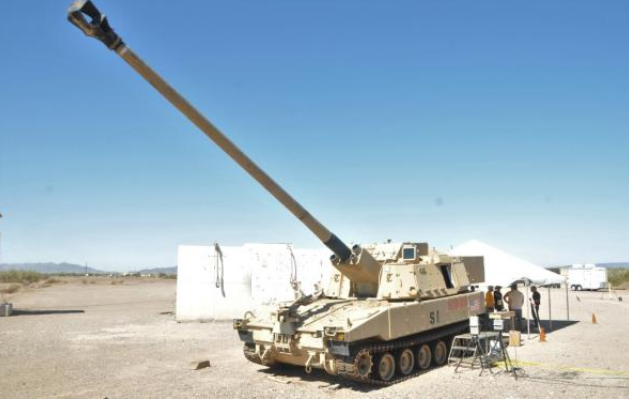 US Army artillery experts recently revealed that a working version of the autoloader designed for the Extended Range Cannon Artillery (ERCA) system should be demonstrated by the end of the year.

According to a report by Military.com, Army leaders on Friday watched the ERCA system launch two rocket-assisted projectiles: a 155-millimeter round and an Excalibur precision-guided round. The projectiles traveled distances of 65 kilometers, which is almost double the range that can be reached by a typical 155-millimeter artillery gun. The test demonstrations took place at the Yuma Proving Ground facility in Yuma, Arizona.

​"This provides a significantly longer-range capability, so it enables commanders to attack and fight differently," Army Vice Chief of Staff Gen. Joseph Martin told reporters after the demonstration, Military.com reported.

"Our adversaries are artillery-centered formations ... so we are never going to have the same number of cannons as they do, but what we will have is overmatch in terms of range, accuracy and lethality," he said.

Army leaders also believe that the ERCA system could be in service for use by 2023 and include a M109A7 Paladin Integrated Management (PIM) “howitzer chassis mounted with a 58-caliber length gun tube that fires the new XM113 rocket-assisted projectile,” Military.com reported. The XM113 is a 155-millimeter artillery projectile that can strike at longer ranges than conventional projectiles.

According to Army-Technology.com, the M109A7 is a next-generation artillery system being manufactured by British multinational defense company BAE Systems. The US Army has contracted BAE Systems to build 18 ERCA systems for use by 2023.

"The autoloader will give us the ability to fire at a rate of six-to-10 rounds per minute and deliver that volume of fire to create the effect of mass in large-scale ground combat," Brig. Gen. John Rafferty Jr., director of the Long Range Precision Fires Cross Functional Team at Army Futures Command, is quoted as telling Military.com. "In the year and a half that I have been doing this job, it has matured significantly."

The autoloader, being developed in a laboratory in Picatinny Arsenal, New Jersey, will undergo demonstrations in December.

"It will demonstrate its ability to take the XM113 off the ready rack in the howitzer, load it into the breech, go grab a supercharged propellent, put that behind it ... and allow the crew to fire the howitzer," Rafferty said.

"The other thing it's got to do, is it has to fuse it and then set the fuse. Right now, it takes two cannoneers and a sergeant watching them to do that, so it is not a simple machine."

The Army also plans to demonstrate the autoloader in conjunction with the ERCA gun in 2021.