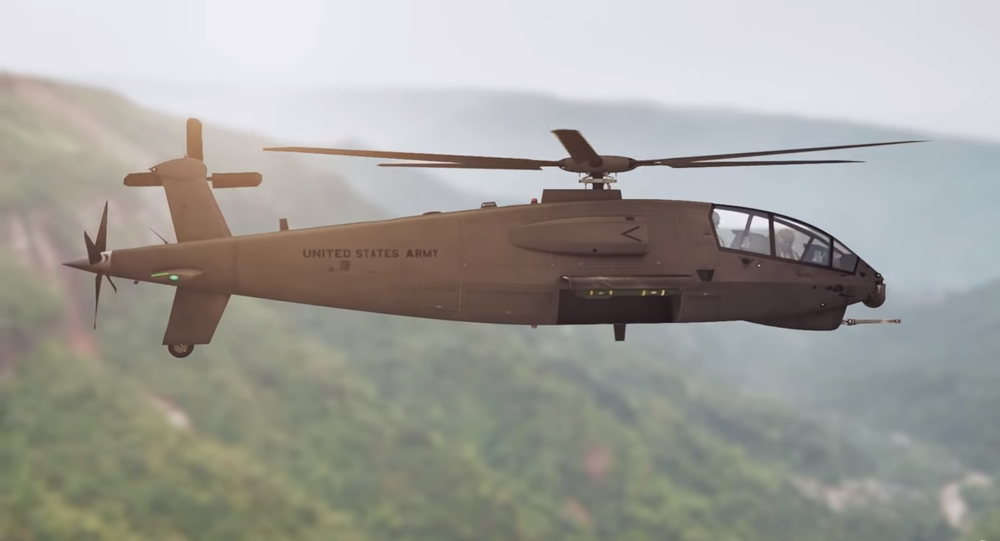 Aircraft maker Boeing has unveiled the design for its entry in the US Army’s Future Attack Reconnaissance Aircraft (FARA) competition, the winner of which will make the Army’s next attack helicopter. The unusual design features a propeller on the back in addition to its typical vertical main and tail stabilizing rotors.

With just days to spare, Boeing has submitted its FARA design for Army consideration. In addition to meeting the Army’s criteria speed and upgradeability, Boeing’s helicopter features a novel, rear-facing third rotor to give it extra speed.

In a video provided by the company, a slim, tadpole-shaped chopper is seen zipping over varied terrain with its landing gear stored internally.

“That main rotor is purpose-built for this particular aircraft,” Shane Openshaw, Boeing’s FARA program manager, told reporters on Tuesday, Defense News reported. “Think of it as the means to provide the agility and maneuverability that this aircraft requires.”

Openshaw said the propeller “will give it the the speed and maneuverability that is needed to support the FARA requirements,” which mandate at least 180 knots at 4,000 feet in 95-degree Fahrenheit temperatures.

The FARA competition is intended to produce a worthy successor to the Army’s OH-58D Kiowa Warrior, built by Bell, which was retired in 2017 and whose reconnaissance and light attack roles have been filled by the heavy AH-64E Apache attack helicopters since then. Last year, the Army also said it wanted entrants to cover duties performed by the MH-6 Little Bird light helicopters.

The Army is expected to pick two of the five bidders to build flying prototypes of their entries, anticipating those prototypes will be flying by 2023 and that a final decision on the winner could be made by 2028.

Bell’s “360 Invictus” craft debuted in October 2019, offering a more traditional design but with short blades to fit between buildings and a supplemental power unit for an extra boost. Bell has boasted the chopper will be able to be flown remotely as well.

Sikorsky’s entry, the “Raider X,” sports a coaxial rotor design made famous by Russian chopper maker Kamov and will reportedly have low observability. Sikorsky is owned by Lockheed Martin, maker of the Pentagon’s F-22 and F-35 stealth fighters.

A related competition being held by the Army is for the Future Long Range Assault Aircraft (FLRAA), a heavier helicopter that can perform both gunship and transportation roles.