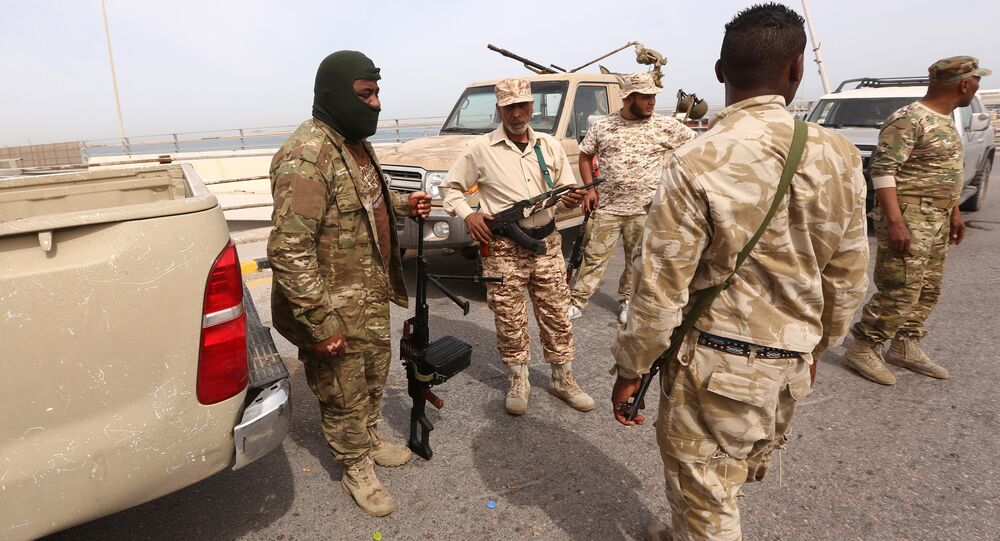 Libya, which was thrust into a violent, nine-year-long civil war in the aftermath of a militia uprising backed by NATO airstrikes in 2011, has returned to the forefront of international attention in recent weeks as major powers increase support for the two factions vying for control of the oil-rich nation.

The Tripoli-based Government of National Accord “wouldn’t mind” if the United States set up a base in the country with the express purpose of confronting and containing Russia, interior minister Fathi Bashagha has said.

“Libya is important in the Mediterranean: it has oil wealth and a 1,900-kilometre coast and ports which allow Russia to view it as the gate to Africa,” the minister, representing one of the two competing Libyan governments, told Bloomberg in an interview on Saturday.

“If the US asks for a base, as the Libyan government we wouldn’t mind – for fighting terrorism, organized crime and keeping foreign countries that intervene at a distance. An American base would lead to stability,” Bashagha added.

Saying that Tripoli wasn’t in the loop about US plans to redeploy forces on the African continent, Bashagha said he “hoped” that the redeployment “includes Libya so it doesn’t leave space that Russia can exploit.”

Bashagha’s comments following months of commentary and speculation about a possible redeployment of US forces in AFRICOM, the US military’s African Command presently containing about 5,100 troops and 1,000 contractors and operating across at least 34 bases in nearly two dozen countries.

Footage of U.S Africa command personnel being evacuated from Libya to a U.S navy ship in the Mediterranean this morning #Libya #Tripoli pic.twitter.com/BsuMo9PbPC

Last month, US Joint Chiefs of Staff Gen. Mark Milley told reporters that the Pentagon was considering relocating troops from AFRICOM to the Pacific. His comments followed media reports that the US was planning to abandon a drone base in Niger and to terminate US assistance to French forces in that country, as well as Mali and Burkina Faso. At the same time, however, the US has moved to beef up its presence in East Africa after the January 5 attack on a US base in Kenya by al-Shabaab* terrorists which killed one US serviceman and two contractors.

Earlier this month, AFRICOM chief Gen. Stephen Townsend warned against any possible drawdown of US troops in Africa, warning that Russia and China might swoop in to fill the “void” left by America.

All U.S. military facilities in #Somalia are unnamed on AFRICOM’s 2018 map. Previously, Kismayo has been identified as a key outpost. Declassified 2015 AFRICOM posture plan names proposed CLs in Baidoa, Bosaaso, and the capital, Mogadishu, as well as Berbera in Somaliland pic.twitter.com/kzI9XWwN3b

The close to decade-long civil war in Libya has taken a turn for the worse in recent weeks after Turkish troops and mercenaries entered the country to try to shore up the GNA government amid the LNA’s ongoing offensive in Tripoli. Ankara has accused Russia of providing assistance to the LNA in the form of private mercenaries. Moscow has denied such claims outright. On Saturday, Ankara confirmed that multiple Turkish servicemen had been killed in clashes with Haftar’s forces.

Once one of the richest and most stable countries in Africa, Libya collapsed into a failed state in 2011, after militants backed by NATO airpower toppled and summarily executed longtime Libyan leader Muammar Gaddafi. The Mediterranean country has since become a haven for militants, terrorists and human smugglers.

* An al-Qaeda-linked terrorist group outlawed in Russia and many other countries.

One Terrorist Killed in US Airstrike in Somalia - AFRICOM

US Awards $420Mln in Aviation Contracts to Support AFRICOM