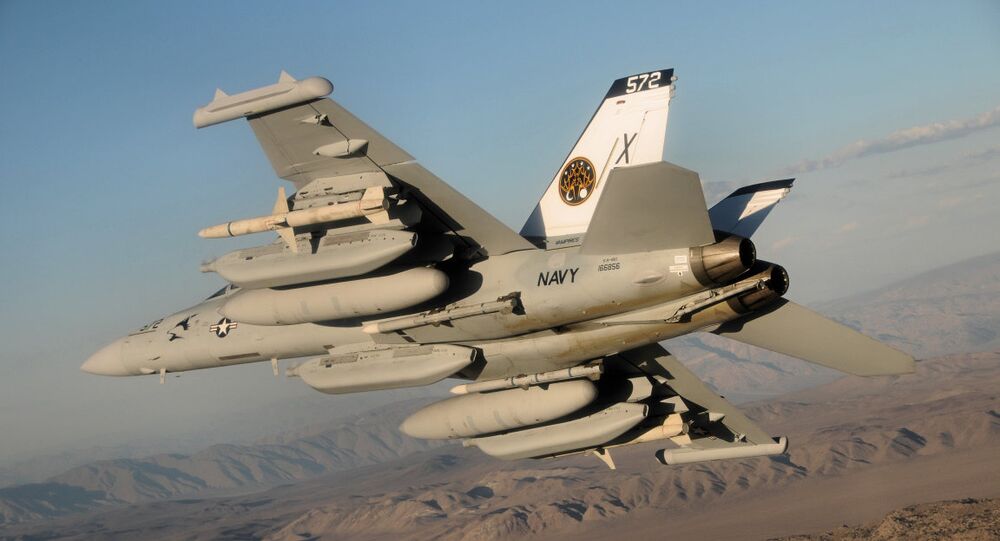 In a test at a Maryland naval air station, a US Navy pilot was able to control two unmanned EA-18 Growlers from a third jet - a new leap for drone technology.

The test was part of the Navy Warfare Development Command’s annual fleet experiment (FLEX) exercises and was hosted at Naval Air Station Patuxent River in Lexington Park, Maryland, a site known for testing the Navy’s unmanned systems. In the drills, a piloted EA-18G Growler controlled two other unmanned Growlers, carrying out 21 demonstration missions over four flights, according to a release by Boeing, which makes the aircraft.

The Growler is an electronic warfare version of the Navy’s bread-and-butter fighter jet, the F/A-18 Hornet. The nimble aircraft has become the staple carrier-based fighter for the Navy, allowing it to retire older aircraft like its S-3 Vikings and EA-6B Prowlers in favor of modified Hornet airframes, simplifying maintenance and training onboard the giant warships.

However, the substitution isn’t perfect. For example, the subsonic Viking had unequalled loiter time and mission range - more than twice what Hornets and the new F-35C Lightning II jets are capable of - which is essential for sub-hunting and ship-hunting duties far from shore. Likewise, the Growlers have only two-thirds the range of the older Prowlers, but with the tradeoff of being able to defend themselves against air attack.

As a result, the Navy has searched for a more permanent solution - likely a “family of systems” both manned and unmanned instead of the earlier proposed F/A-XX aircraft - to pick up the duties of the aging Hornets. This recent test is a step in that direction, commanding unmanned aircraft from another manned aircraft instead of from a remote pilot on the ground.

“This demonstration allows Boeing and the Navy the opportunity to analyze the data collected and decide where to make investments in future technologies,” Tom Brandt, Boeing’s manned-unmanned teaming demonstration lead, said in the Tuesday news release. “It could provide synergy with other US Navy unmanned systems in development across the spectrum and in other services.”

“This technology allows the Navy to extend the reach of sensors while keeping manned aircraft out of harm’s way,” Brandt said. “It’s a force multiplier that enables a single aircrew to control multiple aircraft without greatly increasing workload. It has the potential to increase survivability as well as situational awareness.”

A 2019 study by the Center for Strategic and Budgetary Assessments concluded the Navy needed an unmanned combat air vehicle (UCAV) with an unrefueled range of up to 3,000 nautical miles that was capable of both electronic warfare and air-to-surface strike missions.

“There is still going to be a need for manned fighters to do close-air support, but mostly to do command and control of other platforms that are perhaps unmanned inside a comms-denied environment,” study author and retired submarine officer Bryan Clark told Defense News in May 2019.

“So if you send some loitering missiles or you send UCAVs up forward, you would expect them to be managed by someone who is able to maintain comms with them. That would be a human in a fighter that is able to remain close enough to them to stay in comms.”

Clark noted command-and-control aircraft technology like that demonstrated by the Growlers in Maryland holds great promise for the F-35 as well, because “most of the challenge in doing these kinds of changes is in the software, and the software isn’t dramatically different because it’s really just changing how it manages the fuel, not any of the other functions.”

F-35 maker Lockheed Martin has been developing its own unmanned aircraft to accompany Lightning pilots into battle: the XQ-58A Valkyrie “loyal wingman” drone.

Once operable, the Valkyrie will fly alongside US Air Force pilots, governed by the “Skyborg” artificial intelligence system. The drone will be able to be assigned specific missions, including scouting ahead of the manned aircraft, troubleshooting problems on the parent aircraft’s computer or even playing bodyguard to the human pilot, taking a missile or other enemy fire intended for the manned aircraft, The Verge explained.