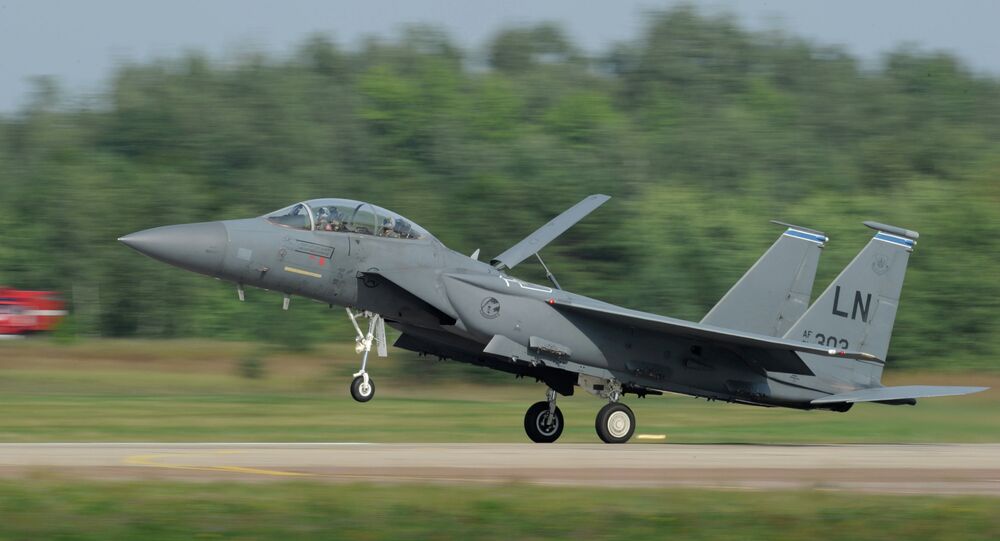 Pentagon Moves Forward With New F-15EX Fighter, Based on Qatar’s Variant of Jet

The US Air Force has posted notices seeking bids on two new F-15EX Eagle fighters as well as new F110 high performance engines for them. It’s the first time the Pentagon has bought an F-15 variant in nearly 20 years.

The Air Force recently announced it would sole-source contracts for the new F-15EX jets as well as for new F110 engines. Since the plane is built by Boeing and the engines by General Electric, it’s fairly certain to whom the contracts will be awarded.

Military.com said the Department of Defense expects a response from Boeing by February 7.

The 2020 National Defense Authorization Act (NDAA) passed last month approved the Air Force’s plan to buy new F-15s, but limited the service to just two planes at first. However, $985.5 million in funds have been provided for a total of eight aircraft, Air Force Magazine reported at the time.

The new F-15EX is based on the F-15QA, the most advanced version of the F-15 to date, built specially for the Qatar Air Force beginning in 2016. By comparison, the USAF hasn’t bought a new F-15 since 2004, according to Task & Purpose, but the C and D variants it’s replacing date to the late 1970s, according to an Air Force fact sheet.

In recent years, Air Force officials have voiced increasing concern about the aging C and D models and their ability to withstand further punishment. In March 2018, all F-15Cs at one Oregon air base were grounded over “structural issues,” Military.com reported at the time.

"The F-15C is not going to make it" to the 2030s, Air Force Secretary Heather Wilson warned at a security forum at Maxwell Air Base last May, noting the service’s plan to extend the lives of a number of its fourth-generation aircraft. "We are already having serious problems with that airframe, with metal fatigue within the longerons on the side of the aircraft."

The EX variant will sport the new Advanced Missile and Bomb Ejection Rack (AMBER) weapons rack, enabling it to carry an unheard-of missile load of 22 projectiles. The new jet will get new, more powerful engines, too. Past F-15s have used Pratt & Whitney’s F100 turbofan engines, which have a maximum thrust output of 129.7 kilonewtons. The engines have powered F-15s and F-16s for decades, but newer, more powerful, and more efficient engines built by General Electric to power the United Arab Emirates’ F-16s will soon displace them. GE’s F110 engines can bring 142.5 kilonewtons of thrust to bear when running on full afterburner.

However, the F-15EX has other new features as well, including a revised internal wing structure, controls updated from hydraulic to fly-by-wire, an APG-82 active electronically scanned array (AESA) radar, new communications systems and an updated heads-up display inside the cockpit, according to The War Zone.