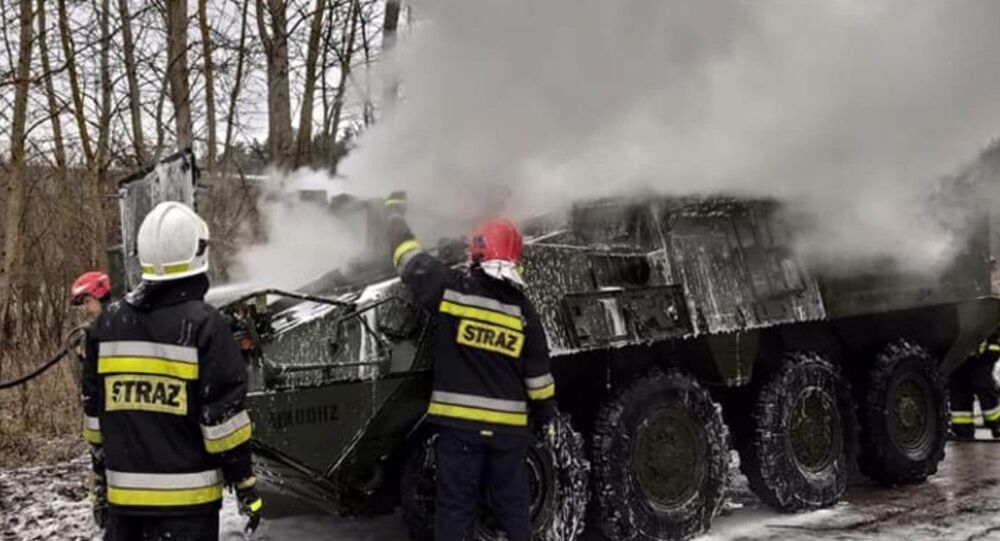 Firefighters were called to assist the 2nd Cavalry Regiment of the US Army Europe over the weekend after their armored infantry carrier burst into flames while traveling through the Polish village of Gorzekaly.

Two soldiers were said to have been in the infantry carrier when they heard a loud noise and detected smoke seeping into the back of the cab. However, no one was injured, and Col. Joe Scrocca, spokesman for the US Army Europe, noted that the damage was contained to the engine.

"The vehicle was recovered, and the initial assessment was that the fire was contained to the engine compartment, and other than scorching marks the hull appears to be okay," Scrocca said, as reported by Task & Purpose.

Photos uploaded to Facebook by the Orzysz 998 volunteer fire brigade show the eight-wheeled armored carrier smoking and covered in firefighting foam after the incident.

Task & Purpose noted that the 2nd Cavalry Regiment, originally headquartered in Germany’s Rose Barracks, was participating in the Enhanced Forward Presence (EFP) mission which kicked off earlier this month.

The mission, which came about as a response to the Russian annexation of Crimea in 2014, is intended to demonstrate the “strength of the transatlantic bond” with forces led by the UK, Canada, Germany and the US. NATO asserted on its website that the operation makes it “clear that an attack on one Ally would be considered an attack on the whole Alliance.”