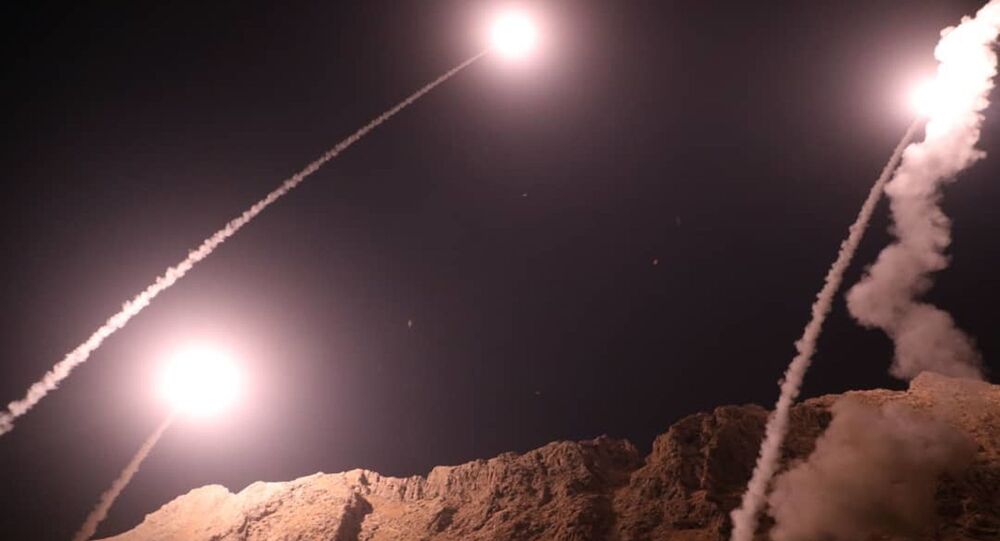 The ballistic missile attacks on two US bases in Iraq last week failed to kill any members of the US-led coalition. However, could that have been the point? While senior officers at Ayn al-Asad Air Base saw bloodlust, other experts dissent, pointing to deliberate restraint by Tehran.

‘Miraculous’ No One Died

"These were designed and organized to inflict as many casualties as possible," Lt. Col. Tim Garland, commander of Task Force Jazeera and a senior official at Ayn al-Asad, told the Washington Post about the January 8 missile attack. Eleven ballistic missiles launched by Iran’s Islamic Revolutionary Guard Corps (IRGC) struck the base as part of “Operation Martyr Soleimani,” a vengeful response to the US assassination of IRGC Quds Force commander Gen. Qasem Soleimani several days earlier in Baghdad.

The missiles struck the US section of the base, which is shared with Iraqi forces and sits about equidistant between Baghdad and Iraq’s western border with Syria. The base houses about 2,000 troops: 1,500 of them from the US-led coalition and the other 500 Iraqi.

While no one was killed in the attack, several dozen US troops were treated for concussions afterward. Garland noted the missiles came in waves about 15 minutes apart, which caught US personnel out in the open as they attempted to assess the damage from the previous attack and search for potential casualties.

Piles of rubble looking like a junkyard hit by a hurricane, that’s how reporters described Ain Al-Asad military based used by American troops, after Iranian missiles rained in retaliation to US assassination of Iran 🇮🇷 General #Solemaini in Iraq 🇮🇶 by US bombing pic.twitter.com/bNCSBPqa30

​That no one died in the hour-and-a-half bombardment was “miraculous,” Lt. Col. Staci Coleman, who oversees airfield operations at the base, told the Post. Initial reports by Iranian media claimed 80 US personnel had been killed, which also suggests IRGC commanders anticipated deaths in the attack.

Garland’s assessment is shared by Army Gen. Mark Milley, chairman of the Joint Chiefs of Staff, who told reporters the day after the attack that “based on what I saw and what I know, that they were intended to cause structural damage, destroy vehicles and aircraft, and to kill personnel.”

“All I can tell you is, factually, they landed at certain points in a populated camp, and they did certain amounts of damage, and there were no casualties,” Milley said, according to Military Times. “Why there were no casualties? In my estimation, from what I know now, I think it has more to do with the defensive techniques that our forces used as opposed to intent.”

‘A Level of Restraint’

However, analysts combing through information about the attack, including satellite photos of the targeted sites, aren’t so sure. Their general consensus is that Tehran broadcast its next move, deliberately targeted buildings housing equipment instead of personnel, and ultimately pulled its punches responding to the killing of perhaps the country’s number 2 leader.

Defense News noted the IRGC targeted al-Asad and the US base in Erbil specifically because they lacked ballistic missile defense systems, which would have obscured its face-saving operation with an embarrassing parry.

The episode actually highlights a major shortcoming of US deployment patterns across the region, which has focused its Patriot air defense systems on major US Central Command bases in Saudi Arabia, Kuwait, Bahrain, Qatar and the United Arab Emirates, at the expense of those deployed at several bases in Iraq and in eastern Syria.

Yet despite this glaring weakness, Tehran warned the Iraqi government more than 90 minutes before the attack began, giving Baghdad time to notify the US-led coalition, the Post noted. Iraqi Prime Minister Adel Abdul Mahdi’s office told US forces about 30 minutes before the attack began. US radar also detected the launching of ballistic missiles, which flew from sites in western Iran’s Kermanshah Province; together, the notices gave US forces ample time to seek shelter and brace for the attack.

© Photo : Planet Labs Inc./Middlebury Institute
Satellite images show damage to hangars and buildings in what appears to be a series of precision missile strikes launched by Iran.
© Photo : Planet Labs Inc./Middlebury Institute
A satellite photo from the commercial company Planet shows damage to at least five structures at the Ain al-Assad air base in Iraq.

A Center for Strategic and International Studies report the following day judged that Iran’s advances in precision missile construction “may have allowed Iran to avoid killing US military personnel, thereby achieving strategic effects while minimizing the risk of further escalation.”

“Certain details of the strike also seem to indicate a level of restraint on Iran’s part. Iran provided the Iraqi government with advance warning, giving time for both US, Iraqi, and other allied forces to prepare. The precision of the attack may have allowed Iran to more carefully choose targets to avoid causing casualties, giving the United States an easier off-ramp to deescalate,” the DC-based think tank, which holds major sway over US foreign policy, noted in the report.

“On the other hand, the attack’s surgical character may also serve as a warning about the potential of future attacks. Iran could use missiles with similar accuracy to maximize damage rather than limit it. The lack of casualties in this particular case may have been a success rather than a failure of Iranian missiles or missileers,” CSIS noted.

Likewise, David Schmerler, an analyst with the Middlebury Institute who examined satellite photos of al-Asad base following the attack, noted the IRGC attack seemed intended to minimize casualties.

"The [damaged] buildings we're tallying now seem to be used for storing aircraft," Schmerler told NPR. "There are other structures at the air base that would be exclusively for people, so maybe they intended to strike sites with equipment over people."