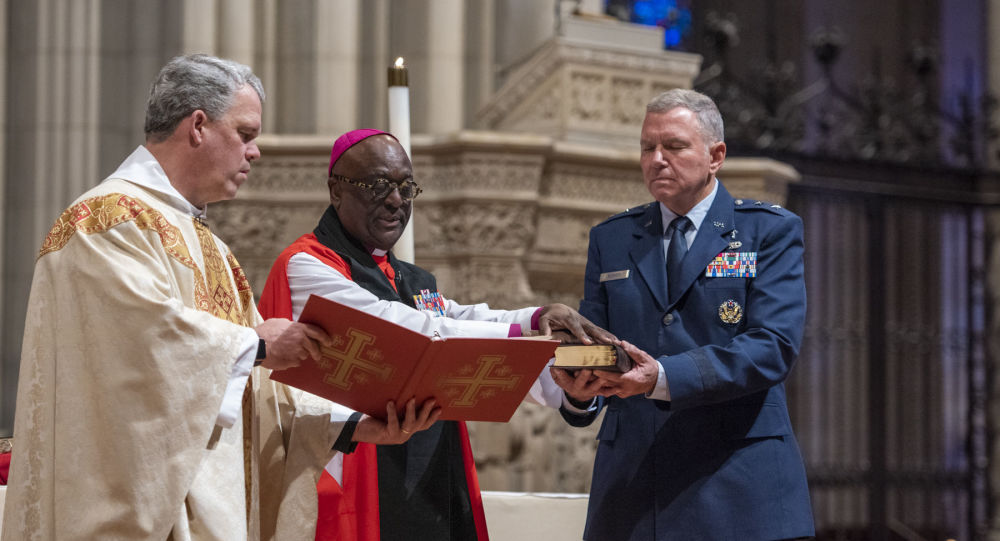 The Washington National Cathedral on Monday blessed the “official Bible” for the Space Force, America’s newest branch of the military. The news that it will be used in Space Force swear-in ceremonies has sparked outrage.

The Military Religious Freedom Foundation (MRFF) has vowed to fight the use of the Bible for the US Space Force and threatened legal action if the ritual is not abandoned.

The MRFF said in a statement that is has received numerous complaints from “outraged” members of the military and civilian personnel at the Department of Defense, after the Washington National Cathedral blessed what it called the “official Bible” of the newly-created Space Force.

The Space Force is a new US military service, established within the Air Force in December 2019 to train and equip for operations related to space. Some 16,000 civilian staffers and airmen from the Air Force Space Command will be assigned to the new unit this year.

The Cathedral tweeted a photo of Rev. Randolph Marshall blessing the Bible on Sunday alongside Maj. Gen. Steven A. Schaick, the US Air Force chief of chaplains, who stood in full dress uniform.

Today @WNCathedral blessed the official Bible for the new @SpaceForceDoD, which will be used to swear in all commanders of America's newest military branch. pic.twitter.com/Bg9KVzrp8W

It was also announced that the Bible, donated by the Museum of the Bible in Washington, DC, will be used to swear in Space Force commanders, including Gen. John Raymond as the first chief of space operations (the most senior Space Force officer). It wasn’t immediately clear from the announcement whether the officers will be able to opt out.

The use of the Bible or any other religious books during military swear-ins is a personal choice in the United States. The current Air Force Chief of Staff Gen. David L. Goldfein and his predecessor Gen. Mark Welsch were both photographed placing a hand on the Bible at their swear-in ceremonies.

However, according to the Balance of Free Exercise of Religion and Establishment Clause in the Air Force instructions, “leaders at all levels…must ensure their words and actions cannot reasonably be construed to be officially endorsing or disapproving of, or extending preferential treatment for any faith, belief, or absence of belief”.

The MRFF argued that the Space Force blessing violates those instructions. The group also promised to file a complaint with Secretary of Defence Mark Esper and assist those who would submit their own complaints with the Defence Department.

“If MRFF’s fervent attempts to exhaust all DoD administrative remedies to eliminate this fundamentalist Christian tyranny and oppression fail, MRFF will plan to stop this matter in Federal court in Northern Virginia,” reads the statement.