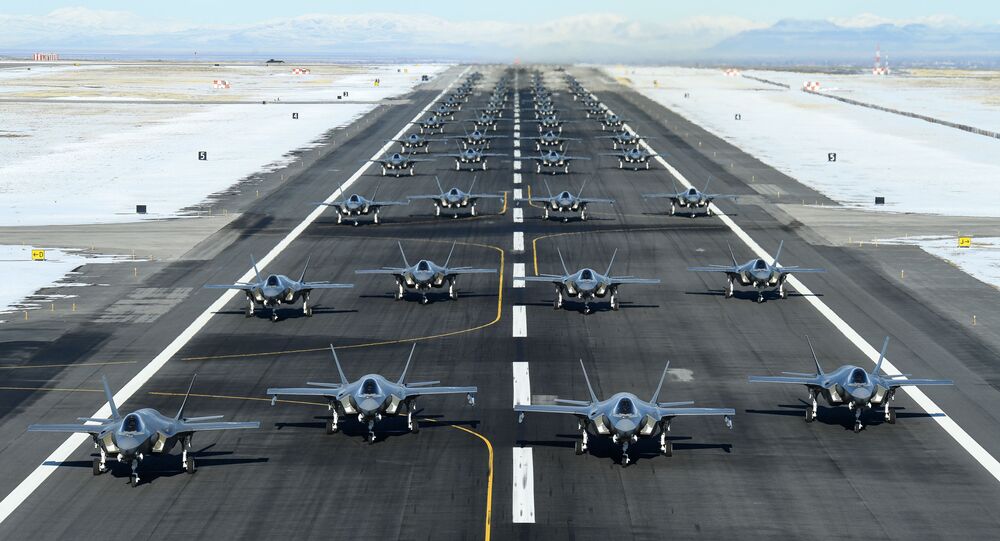 On Monday, Utah’s Hill Air Force Base put on a powerful show of force, practicing a maneuver known as an “elephant walk,” in which they launched more than 50 F-35 Joint Strike Fighters in just minutes. However, the US Air Force swears it has nothing to do with simmering tensions with Iran.

That's the same number of targets US President Donald Trump has said the US military selected in Iran in case a shooting war breaks out.

The whole exercise took just over 10 minutes, according to local paper The Standard-Examiner.

Today we launched about 50 F-35s in rapid succession. Part of a long-planned combat power exercise with @388fw, we pushed the boundaries and tested our Airmen’s ability to deploy @thef35 en masse. We’re ready to fly, fight, and win. @usairforce @USAFReserve @USAF_ACC pic.twitter.com/QskjR6lsch

​“Today’s exercise marks the accomplishment of over four years of work,” said Col. Michael Ebner, vice commander of the 388th Fighter Wing, which took part in the drill.  “A little over four years ago, we received our first F-35; we now have our full complement of aircraft and locally, we turn this into a goal of full war-fighting capability.”

According to Desert News, the base is home to 78 F-35s, meaning two-thirds of its stealth jets took part in the drill.

Ebner told Deseret News that the drill sends a message “not just to potential adversaries, but it’s also to our nation’s leadership that they can count on the 388th Fighter Wing to support the combat power that they plan and require us to provide.”

However, he denied the drill had anything to do with rising tensions in the Middle East, where US President Donald Trump has dispatched numerous strategic bombers and thousands of troops amid threats to bomb Iranian targets.

“What’s going on in the Middle East is completely coincidental with where we are as a fighter wing,” Ebner said.