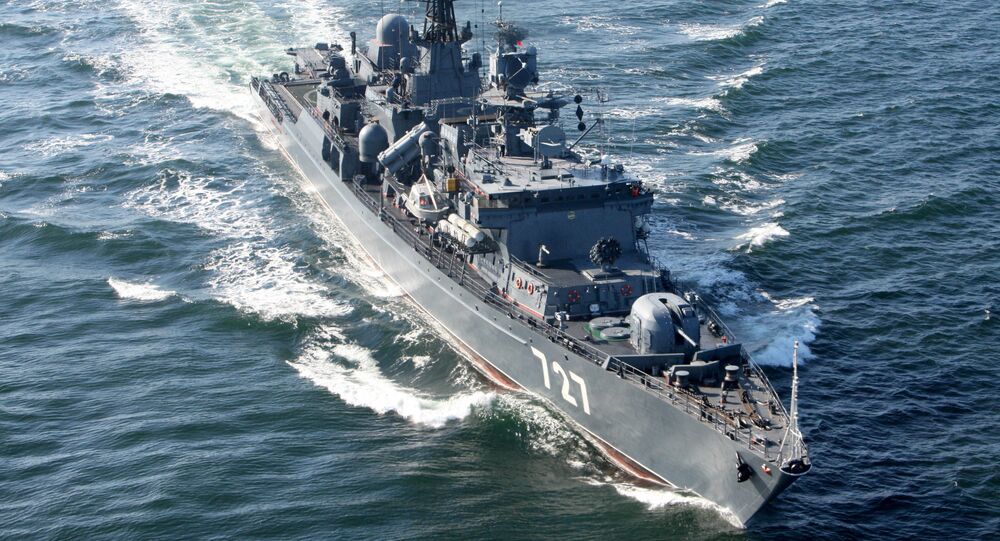 The joint naval exercises, taking place in the Gulf of Oman and the northern Indian Ocean, are the first of their kind for the Iranian Navy since the 1979 Iranian Revolution.

The first footage from the joint Russian-Iranian-Chinese wargames which kicked off Friday has been making its way online, showing joint training, vessels sailing, and Iranian forces welcoming Russian frigate Yaroslav Mudry at Chabahar Port in southeastern Iran, about 415 km southeast of the Strait of Hormuz.

Rear Admiral Gholamreza Tahani, deputy commander of the Iranian Navy, described the drills as an opportunity to engage in “an exchange of experience in the maritime relief and rescue fields; the strengthening and improvement of international maritime trade security in the northern region of the Indian Ocean.”

“The message of this exercise is peace, friendship and lasting security through cooperation and unity,” the senior officer stressed, adding that the drills help show that Iran cannot be isolated.

The drills, set to run until Monday, include search and rescue operations, simulating operations to extinguish vessels which have caught fire, as well as defence against piracy and shooting drills, with both Iran’s Navy and its elite Revolutionary Guards naval formations participating. A total of three Russian vessels are taking part in the drills, with China deploying its new Xining guided-missile destroyer.

The drills cover 17,000 square km & consist of various tactical exercises such as target practice & rescuing ships from assault & incidents such as fires.(2/2)#ایران pic.twitter.com/R74T4haDtf

The drills, code named ‘Naval Security Belt’, are taking place across some 17,000 square km of maritime territory, stretching from Chabahar Port into the Gulf of Omanand the northern Indian Ocean.

On Thursday, the Pentagon, which has announced its own ‘maritime security’ operation in the region, confirmed that it was aware of the drills and would be closely monitoring the situation.

According to Zarif, the ongoing drills serve to “make clear our broader commitment to secure vital waterways.”

Iran’s maritime security proposal is aimed at countering the Washington-led coalition, known as ‘Sentinel’, which includes the US, the UK, Australia, Saudi Arabia, Bahrain, the UAE and Albania, with Israel also reportedly providing unspecified assistance. The US announced its coalition in the midst of the 2019 Persian Gulf Crisis, which saw the seizure and/or sabotage of multiple commercial vessels passing through the Persian Gulf area this past summer, culminating in the destruction of a $220 million US spy drone in the Strait of Hormuz by the Revolutionary Guards. The US’s German and French allies, as well as Japan have demonstrably chosen to stay out of the US-led initiative, with Tokyo expected to send its own naval forces to the region in January after receiving the go-ahead from Tehran.