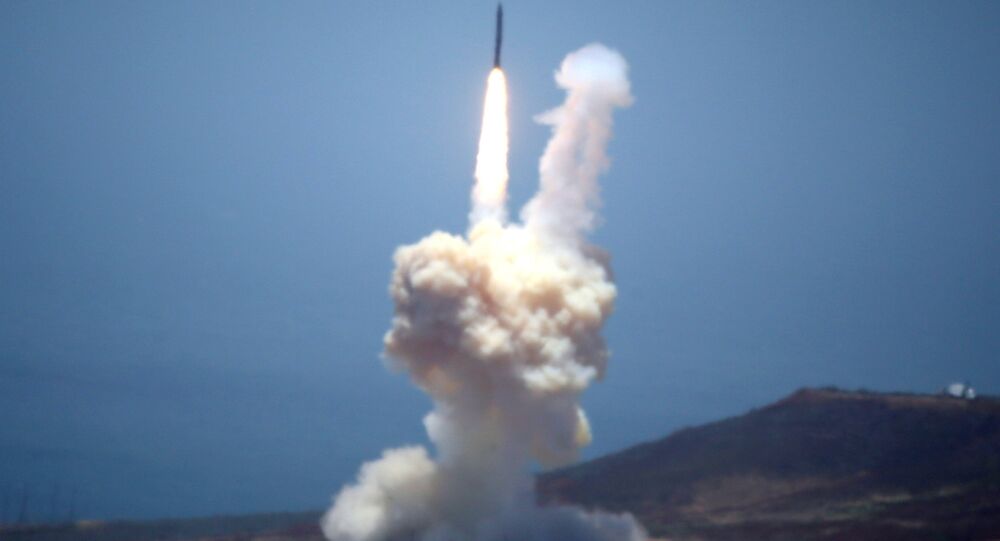 US Has Carried Out Test of Medium-Range Missile - Pentagon

The US resumed testing of ground-based medium-range nuclear-capable missiles earlier this year after scrapping its commitment to the 1987 Intermediate-Range Nuclear Forces Treaty (INF), a landmark strategic arms reduction agreement aimed at reducing the risk of nuclear war in Europe.

The US military tested a ground-launched ballistic missile on Thursday at Vandenberg Air Force in California, the Pentagon said in a statement.

"The Department of Defence conducted a flight test of a conventionally-configured ground-launched ballistic missile at approximately 8:30 am Pacific Time today, December 12, 2019, from Vandenberg Air Force Base, California," the military said, adding that it was "currently evaluating the results of the test."

The Pentagon did not clarify the missile's specifications.

Thursday's test was the second publicly declared test of a ground-based nuclear-capable medium-range missile since August.

The August test saw the test firing of a ground-launched Tomahawk Land Attack cruise missile with a range of over 500 km, a class of weapon which had been banned under the terms of the INF.

The US formally withdrew from the INF in August after announcing its intention to do so earlier this year. Signed in the waning days of the Cold War by Soviet leader Mikhail Gorbachev and US President Ronald Reagan, the INF had prohibited Moscow and Washington from developing, building and fielding nuclear-capable ground-based missiles in the 500 to 5,500 km range. In September, following the US's withdrawal from the treaty, Russian President Vladimir Putin ordered the military to make preparations for a "symmetrical response" to the US decision to scrap the treaty, but promised that Moscow would not deploy new ground-based nuclear missiles in the 500-5,500 km range unless the US did so first. At the same time, Putin said Russia would not be dragged into a new arms race with the US.

Putin has since accused Washington of "inventing" a pretext to withdraw from the INF Treaty, saying the US conducted testing of its new ground-based Tomahawk cruise missile almost immediately after withdrawing from the agreement, even though the development of such weapons requires years. Even before the US moved to scrap the agreement, Moscow voiced concerns over alleged US violations of its terms, including via the so-called dual use MK-41 launch platforms deployed in US missile shield components in Poland and Romania, which Russian officials have said could accommodate a range of offensive weapons, including nuclear-capable Tomahawk cruise missiles. Washington justified its withdrawal from the INF by accusing Moscow of violating its terms with its 9M729 missile, which the US side claimed had a range above limits outlined by the treaty. Russia categorically denied these claims, and declassified previously secret details about the missile system to show that it was fully in compliance.

Following the US's withdrawal from the Anti-Ballistic Missile Treaty in 2002, and its decision to quit the INF earlier this year, the New START agreement remains the last major nuclear arms reduction agreement between the nuclear superpowers. Russian officials have recently expressed concerns that the US side does not seem to have the political will to save that treaty, which is set to expire in February 2021 unless it is renewed. Last week, President Putin said Russia would be prepared to sign an extension on the treaty by the end of 2019 if the US side was willing to do so, but that "so far, we have not received any reaction from [our] partners."