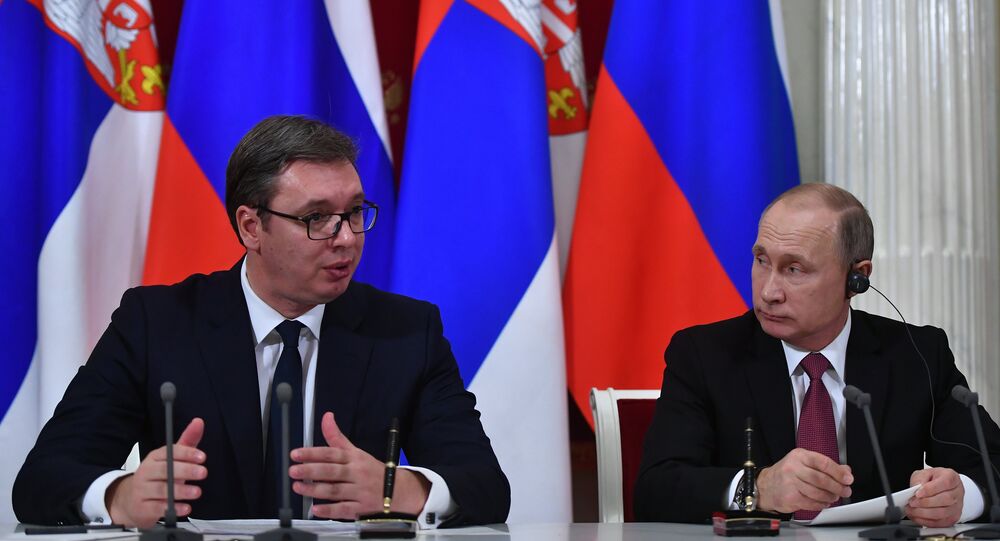 This was the first meeting of the presidents attended by the Serbian ambassador to Moscow, Miroslav Lazansky, a former Sputnik’s columnist and radio host. Summing up, he noted that "the visit was brief but efficient".

According to the Serbian ambassador, the meeting covered several topics from energy to the Kosovo issue, from military-technical cooperation to Russian support for Serbia in all possible international forums, especially the UN Security Council.

"I think that everything was successful. This is also how Russian experts assess the meeting. Yesterday on Russian TV channels, this meeting was widely covered, and reports about it were given before the NATO summit in London. We are extremely proud of everything that happened yesterday in Sochi," the ambassador said.

Economic Cooperation With No Politics and Ideology

Miroslav Lazansky stressed that there are many opportunities to increase economic cooperation. Currently, the bilateral trade turnover is about €2.5 billion a year, with a planned increase up to €3.5-4 billion.

"We have room for cooperation. The possibility of purchasing Russian trams was also mentioned but so far without any specifics; negotiations lay ahead. We also discussed the production of isotopes in the new nuclear centre, for which Russia would provide us with technology. These are isotopes for medical purposes that could later be sold to third countries," he noted.

The Serbian ambassador recalled that Russia and Serbia were negotiating to upgrade the air fleet of the Serbian national carrier Air Serbia by purchasing Russian civil aircraft.

"MC-21 is a new SuperJet, we’ll see what the terms are. Technically, it is a great modern aircraft. If this medium-haul aircraft meets our technical requirements and fits the price, why not buy it? As a state, we pursue a pragmatic policy. We buy equipment and technologies, military and civilian, from all sides, based on the price-quality ratio, and not being dependant on politics or ideology," Lazansky stressed.

Commenting on the purchase of Russian weapons, the ambassador said that weapons and armaments issues were not just a simple bargain but rather a political matter, noting that Russians never set any conditions for their purchase, contrary to the American side:

"We should bear in mind what most people don't know. Serbia is still under the so-called NATO technical and technological sanctions on some military products and combat systems," Lazansky pointed out.

Support to Serbia on the Kosovo Issue

In Sochi, the Presidents of Russia and Serbia discussed all the topics related to bilateral relations, including the Kosovo issue. Lazansky noted that Moscow was pursuing a consistent policy on this matter and showed readiness to support compromise solutions if they benefit Serbia.

"Russian Foreign Minister Lavrov said that Russia supports respect for international law, Resolution 1244, but also any agreement that Belgrade and Pristina can reach, and even used the word "compromise," the ambassador said.

Quoting Russian Foreign Minister that Russia would agree to what Serbia approves, Lazansky pointed out that Russia was interested in resolving the Kosovo issue contrary to some Serbian public opinion that believes that Moscow is not interested in a solution:

"This is not true! If you look more closely at the issue, Russia might even be interested in recognising Kosovo, given the Crimean issue. But President Putin once again made it clear that Russia will always be on Serbia's side on the Kosovo issue and that Russia respects Serbia's territorial integrity", he said.

President Putin said at a joint press conference that Serbia will be provided with gas even if Russia fails to reach an agreement with Ukraine on extending transit contract to Europe.

"I would summarise the gas topic using the words of President Putin that come down to the following: "Serbian brothers, don't worry, you will always have gas," Lazansky said.

Whether the gas will be supplied through third countries or Ukraine, if the Ukrainian direction remains active, is just a technical issue, the ambassador noted.

Miroslav Lazansky said that Russia and Serbia have plans for the joint production of weapons, including complex combat systems. He clarified that there were such plans but the Russian president did not specify exactly what it was about:

"President Putin said nothing specific, but we could probably produce armoured personnel carriers, infantry fighting vehicles, and wheeled military vehicles. We could cooperate in the production of heavy trucks or their parts that can be used for both military and civilian purposes. This was mentioned by President Putin. We are importing Russian KAMAZ trucks to modify them with the Nora-52B self-propelled howitzer. We need to see if there is room for cooperation. I think there is," the Serbian ambassador suggested.

Lazansky stressed that Serbia not only buys Russian weapons and military equipment but also supplies some ammunition to Russia. For example, the 155 mm calibre artillery ammunition:

"The USSR and the Warsaw Pact countries used 152 mm calibre and did not produce 155 mm. But we produce it. Now, Russia probably needs ammunition of this calibre, and buys it from Serbia," he concluded.