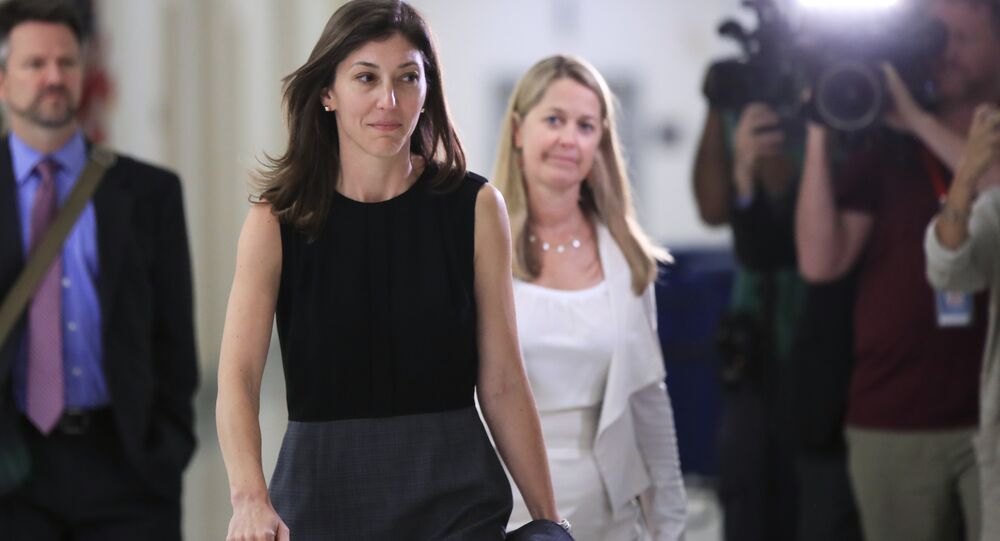 Page disappeared from view in May 2018 after it was revealed she’d exchanged text messages heavily critical of Trump with her illict lover, then-FBI special agent Peter Strzok, both prior and subsequent to his election.

Controversial former FBI lawyer Lisa Page has broken her longstanding silence, giving a lengthy exclusive interview to The Daily Beast about the variety of allegations that have been levelled against her since her acrimonious departure from the Bureau.

Page told the publication she’d decided to come forward following Trump performing an impression of her having sex with Strzok during a rally in Minneapolis in November, and publishing a number of tweets mentioning her.

"My heart drops when I realize he has tweeted about me again. The President of the United States is calling me names to the entire world. He's demeaning me and my career. It’s sickening, but it's also very intimidating…When the president accuses you of treason by name, despite the fact that I know there's no fathomable way I’ve committed any crime at all, he's still somebody in a position to actually do something about that, to try to further destroy my life. It never goes away or stops, even when he’s not publicly attacking me,” she despaired.

​Page going public comes just over a week before Justice Department Inspector General Michael Horowitz is scheduled to release his report on alleged government surveillance abuses against Trump campaign adviser Carter Page, and the Bureau’s use of former MI6 operative Christopher Steele as an informant despite internal misgivings about his credibility. Page was part of the FBI’s counterintelligence investigation into Trump's campaign, and later special counsel Robert Mueller's investigation until she was abruptly removed following the exposure of her text messages with Strzok.

For his part, Attorney General William Barr stated earlier this year he believed "spying did occur" on the Trump campaign, and its justification and legitimacy was potentially questionable. At least one FBI lawyer, Kevin Clinesmith, is now subject to a criminal investigation for allegedly altering a record related to the surveillance of Page – and lawyer John Durham is also conducting a criminal inquiry into the origins of the Russia investigation, which began life as a mere administrative review.

This condescension and ad hominem combined with a refusal to grapple with any of the litany of issues concerning the conduct of Lisa Page in conjunction with her colleagues—while you’re trying to make her a sympathetic victim coincidentally on eve of IG report—speaks for itself https://t.co/4PQl7IbHLL

​Page told Daily Beast “it would be nice” if Horowitz’ report her personal opinions “had absolutely no bearing on the course of the Russia investigations”, but wasn’t optimistic about such a finding exonerating her in the eyes of “a lot of people”, as the President “has a very loud megaphone”.

In one notorious text exchange in August 2016, Page asked Strzok, “[Trump's] not ever going to become president, right?!”, to which he responded “no, no he won’t, we’ll stop it”.

Horowitz’ 2018 report on the conduct of the Bureau and Justice Department during the inquiry into Hillary Clinton's unauthorized private email server said the text messages between the pair "created the appearance investigative decisions were impacted by bias or improper considerations”, but there was no evidence “improper considerations, including political bias, directly affected specific investigative decisions”.

Nonetheless, the Inspector General concluded text messages sent between Strzok, Page, Clinesmith, and two other FBI employees “brought discredit to themselves” while harming the Bureau’s reputation “for neutral fact-finding and political independence”.

Many note Lisa Page has decided to talk on eve of IG report release. True. But IG has already written (in 2018) that Page & Strzok caused damage that 'goes to the heart of the FBI's reputation for neutral factfinding and political independence.' https://t.co/8BjabXS5vp pic.twitter.com/7MomA18Shp

Communications between Strzok and Page have also been cited in legal filings by the lawyers of Michael Flynn, who contend they show Page, then-Special Counsel to Deputy Director McCabe, edited the details of Flynn’s 302 – the form used by FBI operatives to report or summarise interviews they conduct – to falsely incriminate him.

​In one text exchange the pair engaged in dated 10th February 2017 provided in the filing, Strzok tells Page to “drop off what you have” so he can “incorporate” the content – in response, she says “I gave my edits to Bill to put on your desk”. A few texts later, Strzok confirmed he made Page’s requested edits, stating he also emailed her “an updated 302”.

​It’s not entirely certain what prompted the edits, but Flynn’s lawyers suggest the impetus was news reporting that day alleging Flynn discussed sanctions with Ambassador Kislyak, contrary to what Vice President Mike Pence had asserted previously – and a comparison of the 302 before and after Page’s edits seems to strongly support this contention.