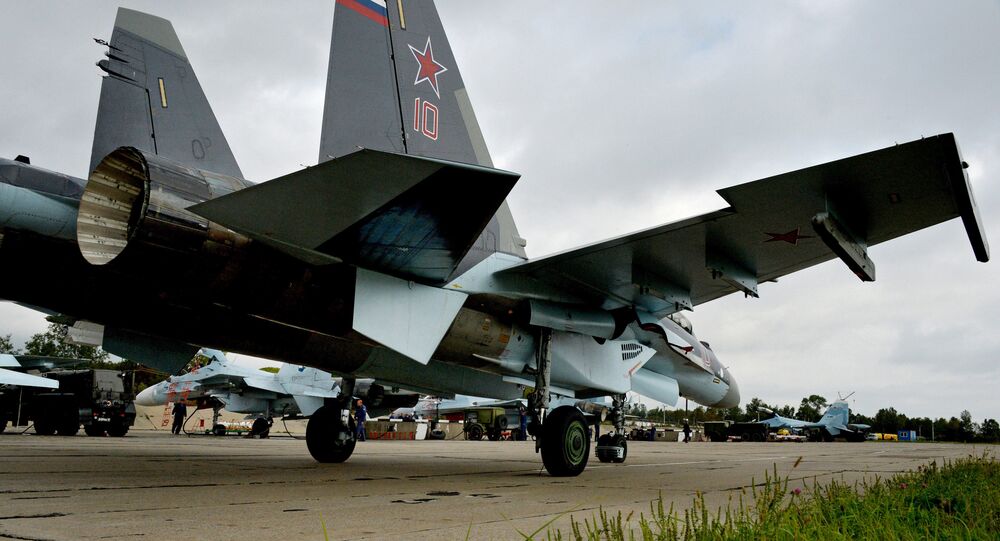 Egypt Puts Itself at Risk of US Sanctions by Purchasing Russian Figher Jets, American Official Says

Russia intends to start deliveries of nearly two dozen Su-35E air superiority fighter planes to Egypt between 2020-2021 in a deal worth the equivalent of over $2 billion. US officials have repeatedly warned that the delliveries could lead to sanctions against Cairo.

Egypt's decision to purchase Russian-made fighter aircraft may result in sanctions and a halt in the delivery of US military equipment to the country, US Assistant Secretary for Political-Military Affairs R. Clarke Cooper said Monday, speaking at the Dubai Airshow.

Last week, US media reported that Secretary of State Mike Pompeo and Defence Secretary Mark Esper had sent an urgent letter to Egypt urging Cairo to scrap its Su-35 deal with Russia, with the appeal reportedly warning that the Russian arms would "complicate" future deliveries of US military assistance to the country.

The US is known to send some $1.3 billion in military assistance to Egypt annually, with the money aimed at ensuring normalised relations between Cairo and neighbouring Israel.

The Trump administration has repeatedly warned Egyptian President Abdel Fattah el-Sisi against closer relations with Russia, voicing its "concern" over "expanding Russian influence in the region," and urging "the Egyptians to turn more toward the West, toward the United States."

Russian-Egyptian cooperation goes back to the 1950s, and has included economic and military assistance and, more recently, cooperation in the fight against terrorism. Earlier this year, Russian President Vladimir Putin ratified a comprehensive partnership and strategic cooperation agreement which was agreed upon following his meeting with President el-Sisi in Sochi last year. The agreement envisions increased trade, economic, and military ties, as well as partnerships in areas including communications technology, nuclear energy, transport, mining, tourism, science, education and cultural ties.

The US has repeatedly threatened to slap sanctions on any country which buys Russian-made military equipment. In 2017, President Trump signed the Countering America's Adversaries Through Sanctions Act (CAATSA) into law, with the measure allowing Washington to sanction any country buying Russian arms. The law has been applied against China over its purchase of Russian S-400 air defence systems and fighter jets, but US officials have been hesitant to apply it against other countries, including Turkey and India, which have also signed multi-billion dollar weapons deals with Moscow.

The Sukhoi Su-35 E is a 4++ generation single-seat, twin-engined super-manoeuvrable air superiority fighter jet which makes use of a number of fifth-generation fighter technologies, including advanced avionics, thrust-vectoring engines, improved weapon control and advanced radar. In addition to Russia, the plane has been purchased by China and Indonesia. Along with Egypt, the UAE, India and Brazil have also previously expressed interest in the aircraft.