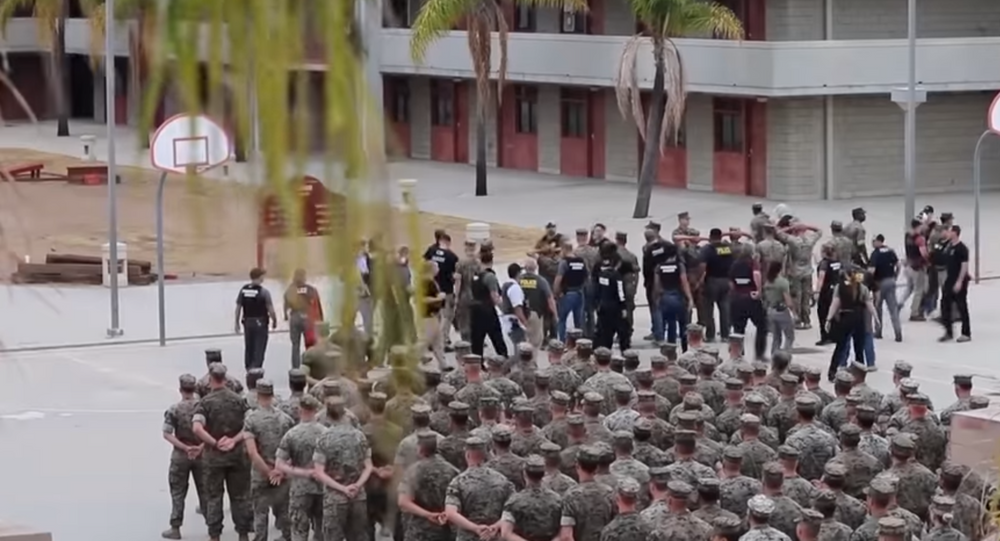 New footage from the US Marines Corps Communication Office shows the arrest of 15 Marines by dozens of Naval Criminal Investigative Service (NCIS) agents earlier this year following an investigation into a human smuggling ring at the US-Mexico border.

On July 25, approximately 800 US Marines of the 1st Battalion, 5th Marine Regiment were assembled at the Camp San Mateo section of Marine Corps Base Camp Pendleton in San Diego County, California, for a special recognition ceremony highlighting 15 of their peers.

While the select group of Marines may have thought they were about to receive an award or honor, 5th Regiment Sgt. Major Matthew A. Dorsey quickly dismissed those thoughts when he pointed at the service members and said, “NCIS, arrest these Marines,” according to the San Diego Union-Tribune.

This mass arrest, reported by Sputnik back in July, came three weeks after Lance Corporals David Javier Salazar-Quintero and Byron Darnell Law II were arrested on accusations of illegally transporting immigrants across the US-Mexico border “for financial gain.”

“We are aware of the charges facing Lance Cpl. Law and Lance Cpl. Salazar-Quintero, and we continue to cooperate fully with the investigative efforts into this matter,” Marine spokesman 1st Lt. Cameron Edinburgh told the Marine Corps Times after the July 3 arrest of the pair.

That cooperation ultimately led to the arrest conducted by some 40 NCIS agents and recorded by the USMC, according to a statement from the Marine Corps.

“It was an eye-opening thing for the rest of the battalion,” Edinburgh told the OC Register on July 25. “It had a shock and awe factor. The command wanted to send a message to make clear this type of behavior is not tolerated.”

While 13 Marines were charged with conspiracy and human smuggling, and another eight troops were questioned - but not charged - in relation to suspected drug activity, lawyers representing the accused have argued that the public arrest was not only illegal, but also tainted the jury pool.

“The government’s actions in this battalion formation arrest and their post-arrest comments to the battalion are wholly unacceptable and inappropriate,” attorney Bethany Payton-O’Brien said in a defense motion filed on Friday, reported the Union-Tribune. She went on to express that the spectacle and recording of the scene amounted to “unlawful command influence” on the case and cited Edinburgh’s previous comments as proof of the USMC’s actions being an illegal pretrial punishment.

Jeremiah Sullivan, another lawyer representing an accused Marine, told the Union-Tribune that the situation is “puzzling, but not surprising.”

Edinburgh clarified to the outlet that the decision to record the arrest did not come from the 1st Battalion, 5th Marine Regiment, but instead from the 1st Marine Division’s communication strategy office.

“It was something we felt should be done for proper visibility,” he said.

The accused Marines have remained in the Camp Pendleton brig until their pretrial dates, which have yet to be made public.