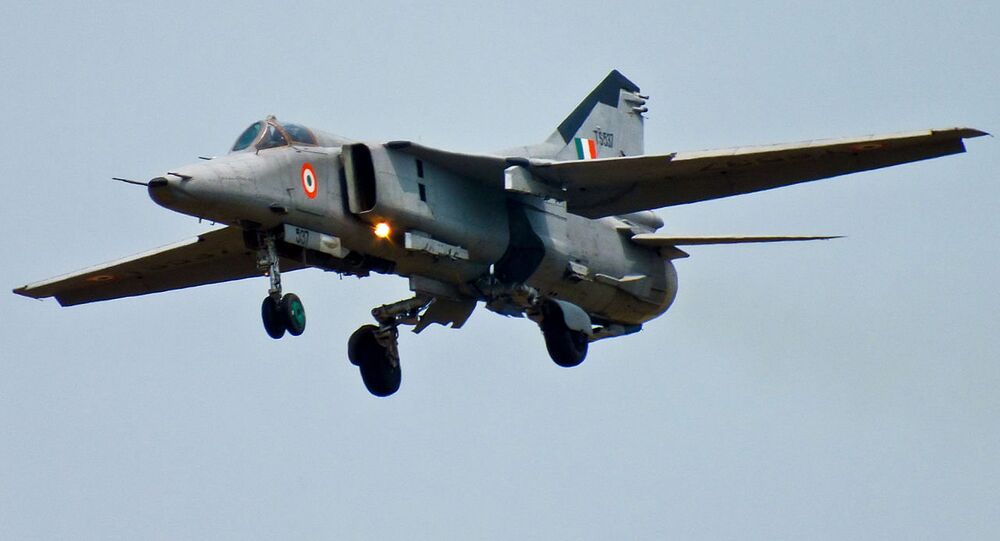 First introduced into the Soviet Air Force in 1975, the MiG-27 ground attack aircraft began to be delivered to India in 1984, with Hindustan Aeronautics Limited starting domestic production a year later and continuing to build the planes until 1996. In all, the Indian Air Force is thought to have amassed some 210 MiG-27s in several variants.

The Indian Air Force’s last remaining squadron of upgraded MiG-27UPGs will make its final flight from Jodhpur Air Base in Rajasthan, northwestern India, in late December, IndiaToday has reported, citing an official source.

According to the source, the planes, belonging to 29 Scorpio Squadron, will make their last flight at an official ceremony on December 27.

The decommissioning follows the retirement of two squadrons of MiG-27s at the Hashimara Air Base in Bengal in 2017.

Hindustan Aeronautics ended up building 165 of the ground attack planes, christening them the ‘Bahadur’ (‘Valiant’) , and upgrading them to MiG-27UPGs starting in 2004.

According to IndiaToday, the planes played a “crucial role” in the Kargil War of 1999, during which India regained possession of the Kargil district in Kashmir after Pakistani troops disguised as Kashmiri fighters attempted to infiltrate the Indian side of the Line of Control border. India lost one MiG-27 in the fighting as the result of engine failure.

Before their retirement, the planes, equipped with a powerful engine and variable geometry wing design, were used by seven separate squadrons and as combat training aircraft, and served as the backbone of the Indian Air Force’s ground attack capability throughout much of the 90s and 2000s. The planes were equipped with an assortment of precision missiles, rockets and TV and laser-guided bombs. In their final years of service, the planes began to show their age, with India losing over a dozen MiG-27s in crashes.

Once India retires its planes, Kazakhstan will be the last country with MiG-27s in its inventory. Russia grounded its fleet of MiG-27s in the early 1990s due to budget cuts following the end of the Cold War. The planes also previously served in several air forces of the former Warsaw Pact, as well as Sri Lanka, Cuba, Egypt, Iraq, Libya and Algeria.

India has been a major client and partner to the Russian military aircraft industry for decades, and has signed billions of dollars’ worth of contracts with Russian aircraft makers for fighters, bombers, helicopters and other aircraft. In addition to buying Russian-built planes, India has taken to buying Russian products on export license, and upgrading and otherwise tweaking the aircraft to improve their suitability for use under local conditions. Soviet and/or Russian aircraft in India’s arsenal include the MiG-21 Bison, the MiG-29UPG, the Sukhoi Su-30MKI, the Beriev A-50 AEWACS, the Ilyushin Il-78 aerial refueling craft, the Ilyushin Il-76 strategic airlifter, the Mil Mi-17 utility helicopter, and the Mil Mi-24 attack chopper, among others.