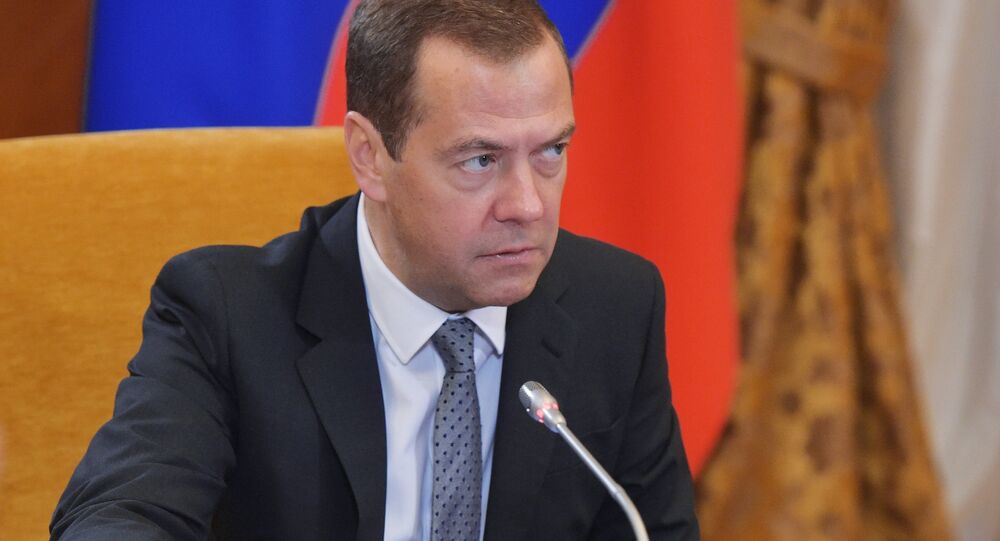 MOSCOW (Sputnik) - Moscow will respond politically and "in the military sense" to NATO's drive to deploy military bases near the Russian borders as it threatens the country's national security, Russian Prime Minister Dmitry Medvedev said.

"No one denies that Russia has own interests related to ensuring its security. We are a large country, we are a nuclear state, and the desire to place NATO bases in our immediate vicinity obviously cannot fill us with positive emotions," Medvedev said in an interview with the Serbian newspaper Vecernje Novosti (Evening News) on the eve of his visit to Belgrade.

"We have always responded and will continue to respond to this, both politically and in a military sense," he stressed.

Medvedev also said that attempts to drag countries with internal conflicts into NATO are dangerous and fraught with very serious consequences.

“All attempts to drag countries with internal conflicts into NATO are extremely dangerous. You mentioned Bosnia and Herzegovina, the Republika Srpska, but we can also name other countries. What is happening to Georgia? What is happening to Ukraine? Those countries are in a difficult situation," Russian Prime Minister said.

"And secondly, this is fraught with very serious consequences. Therefore, the NATO member states should think a hundred times before making such decisions," Medvedev stressed.

Russian Prime Minister also said that ideas of creation of some new alliances or states in the Balkans are dangerous because they lead to nationalist circles pursuing their goals using arms, adding that violence should not be allowed to re-emerge in the region.

In the interview, Medvedev reiterated Russia’s position on Kosovo based on the need to preserve the sovereignty and territorial integrity of Serbia. Russia is convinced that any discussions on this issue should be based on international law, not unilateral moves, according to the prime minister.

"Ideas to create various new alliances and states are very dangerous. Because they eventually make the most aggressive and the most nationalist oriented circles pursue their objectives using violence and arms, and there is already enough of it there. I believe these statements are very dangerous. The processes that are underway must be monitored," Medvedev said when asked to comment on whether the situation in the Balkans, given the recognition of Kosovo by multiple western countries, may lead to the creation of the so-called Greater Albania.

Medvedev noted, however, the "pressure coming from Pristina," recalling that ultranationalist had recently come to power in Kosovo.

"I believe that all the developments should be thoroughly monitored because it is obvious that the Balkans remain a rather unstable region and we should not allow any repetition of manifestation of acts of violence, attempts to unilaterally redraw the map of the Balkans or any other actions that could lead to a humanitarian catastrophe," Medvedev insisted.

Dmitry Medvedev also said that the United States in its drive to dominate the world brings harm to Europe, the European countries are already tired of these US aspirations.

"The United States only likes the ideas that are born in the offices of the White House and the Department of State in Washington, DC, it likes only those ideas that ultimately lead to the economic well-being of the United States," Medvedev said.

"They [the Americans] promote these ideas by all means, this is not a secret, this is the main course of the United States States of America. Hence, they claim that Russia supports one side or another, or is doing some sort of harm," the prime minister said.

"But in fact, it is precisely these US aspirations to dominate the whole world, including the Balkans and Europe, that cause the main harm. By the way, Europe itself is tired of these aspirations, or these desires," he stressed.

Russian Prime Minister also said that Russia, unlike the United States with its unstoppable desire for dominance, takes a balanced position and strives to build normal relations with all countries regardless of their membership in military blocs.

“This is an unstoppable, absolutely unrestrained [US] desire to dominate the world, including Europe. In this sense, we have always taken, in my opinion, a balanced position. That is we want to be friends with all countries, and, of course, we have normal relations with the states that are located in the Balkans, regardless of their membership in a particular military-political bloc," Medvedev said.