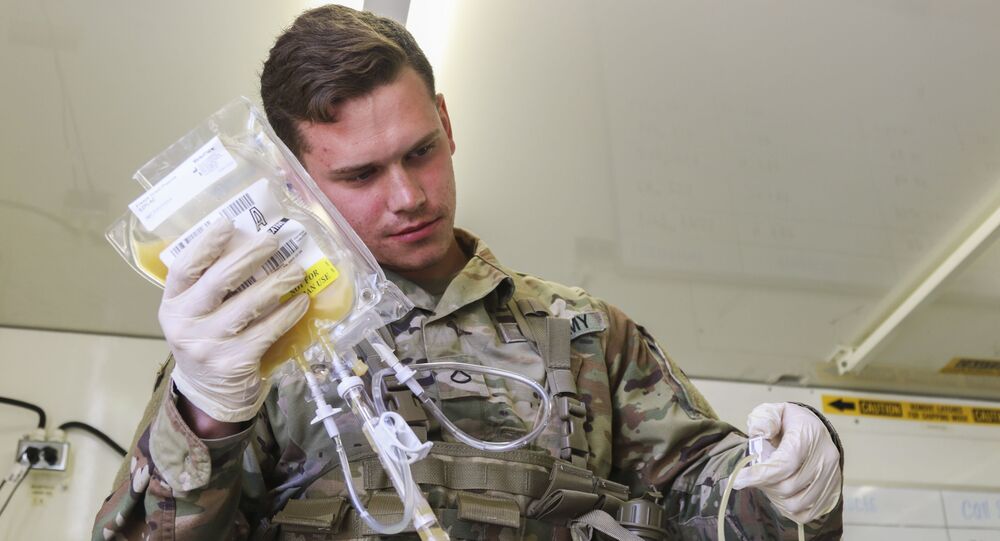 The US Army Medical Materiel Development Activity (USAMMDA) and an unnamed American medical company recently took part in a groundbreaking test mission that seeks to cut down on the amount of time needed to deliver blood plasma to wounded soldiers on the battlefield.

It was announced last week that airborne soldiers from the 432nd Blood Support Detachment, 44th Medical Brigade at Fort Bragg, North Carolina, recently packed their bags with rehydrated freeze-dried plasma (FDP) and boarded a CH-47 Chinook helicopter to test the transportation of the life-saving substance to injured troops in need.

"Tourniquets helped in enhancing survivability for our war fighters, but it's blood that keeps them alive," Col. Roberto E. Marin, the material systems branch chief of the US Army Medical Department, explained in the September 26 release.

According to the Army, 40% of combat casualties are related to severe blood loss.

Unlike fresh frozen blood (FFB), FDP can be stored at different temperatures in its “ready-to-use bag” and has a much shorter prep time.

"Currently FFB takes roughly thirty minutes to thaw for surgical use,'' Captain Robert Crochet, a primary medical test officer, said in the release. "With freeze dried plasma, it takes roughly 1-6 minutes to rehydrate and become ready to administer to the casualty. Those minutes can be the difference in life or death."

Additionally, the FDP tested by US Army last week is said to be stored in a plastic bag and hard plastic sheath, rather than the usual glass container, which was prone to breaking during transport.

Since a July 2018 decision by the Food and Drug Administration (FDA), the US Army has been exploring the use of “Pathogen-Reduced Leukocyte-Depleted Freeze-Dried Plasma” from France’s “Centre de Transfusion Sanguine des Armées.”

The substance has not, however, been approved for broader use in the US, but Dr. Larry J. Dumont, director and senior investigator at the Blood Systems Research Institute in Denver, Colorado, told Healthline that FDP is predicted to be useful in disaster relief and hospital emergencies due to it being easily stockpiled.

Though the US Army and USAMMDA did not reveal the type of FDP used by troops last week, Stars and Stripes noted that Pennsylvania-based Teleflex Inc. is a likely contributing to the initiative, as the medical company has partnered with US military and is vying for FDA approval of its own American-made FDP product.