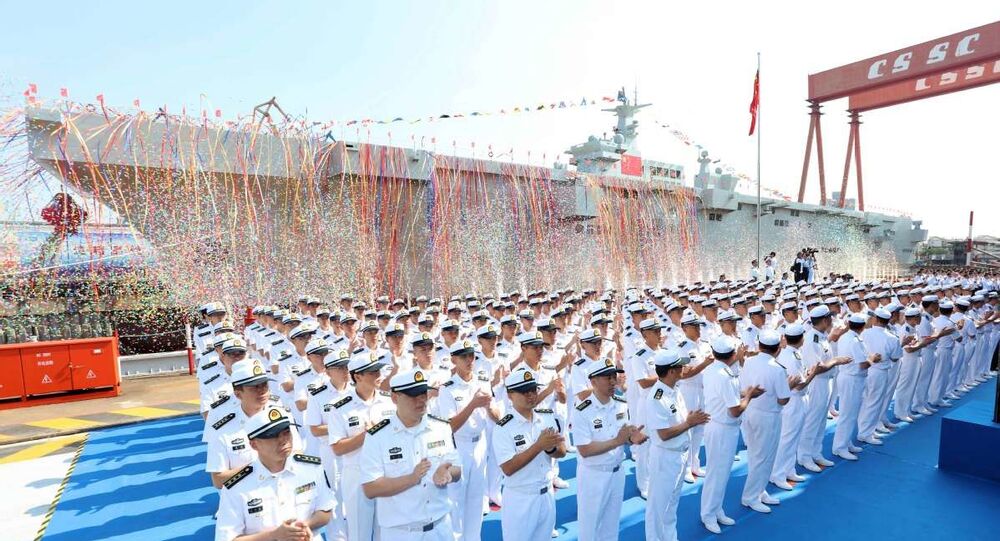 China’s first helicopter carrier, the Type 075 landing helicopter dock (LHD), was declared complete in a Wednesday ceremony in Shanghai. While largely ignored by the international press, the warship rivals the larger aircraft carriers of most navies.

Bearing a completed superstructure and a fresh coat of paint, the 40,000-ton Type 075 LHD was declared complete in a launching ceremony at a shipyard in Shanghai Wednesday.

The launch ceremony of first 075 LHD is held today pic.twitter.com/y3pi3SZelQ

​"The Type 075 will become an indispensable and fresh force in China's modern naval warfare, especially for landing missions," an anonymous military expert told the Global Times.

The Global Times noted Chinese military enthusiasts were “amazed” by the speed at which the ship was completed. Just last month, photos of the shipyard showed the vessel’s command island being moved into place, with installation of electrical systems, including radar, yet to be done.

However, the ship is nowhere near ready to assume combat duties. As the lead ship of what is expected to be a class of at least three vessels, the first Type 075 will need to be subjected to possibly years of rigorous testing to ensure all the new systems work. Chinese People’s Liberation Army Navy (PLAN) sailors and aviators will also need to establish routines and best practices for flight ops on the helicopter carrier, something the PLAN has not yet had to contend with.

The PLAN’s other aircraft carriers, the Liaoning and Type 001A, operate primarily fixed-wing aircraft like the Shenyang J-11, launching them using a bow ramp and catching them with an arresting wire as they land. However, it’s unknown if Beijing’s new carrier-based drones will be able to fly from the Type 075’s 250-meter-long flight deck.

It is quite surprising that not many pictures have been published so far showing the first Type 075 LHD in the water or even outside the dry dock. 🤔

​Weighing in at 31,000 tons empty and 40,000 tons fully loaded, the Type 075 is larger than the aircraft carriers and amphibious assault ships of many other nations, including Italy, France, Spain and Turkey, as well as those of regional powers like South Korea, Japan and Thailand. It’s roughly equivalent in size to the US Marine Corps’ Wasp-class LHDs, or a World War II-era fleet carrier.

However, unlike the Wasps, China at present operates no short/vertical takeoff and landing (STOVL) aircraft like the F-35B Lightning II or V-22 Osprey, seriously limiting the Type 075’s power projection compared to other nations.

In June, the Global Times highlighted this shortcoming, citing commentary from Beijing-based military analyst Wei Dongxu, that “In a landing mission, STOVL fighter jets from these ships would be a more efficient choice than helicopters to support amphibious operations, gaining aerial superiority and attacking ground targets … Once developed, the STOVL fighter jet could make an amphibious assault ship [into] a light aircraft carrier and play unique roles in protecting islands and safeguarding China's territorial integrity.”

In addition to its roughly 30 helicopters, the Type 075 has a rear docking area and will be able to carry several amphibious landing craft capable of transporting tanks, artillery and thousands of marines to forward fighting positions on land.