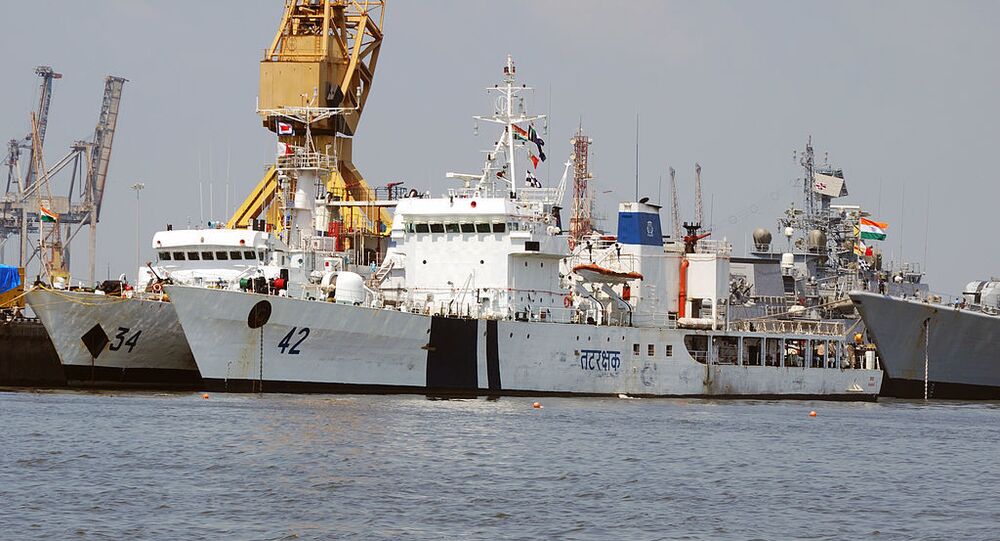 New Delhi (Sputnik) India is set to rapidly increase the number of patrol vessels and aircraft available to the Coast Guard, the country’s smallest armed force. The defence ministry aims to equip its coast guards with over 200 ships and 110 aircraft by 2022.

Amid intelligence reports suggesting a major threat from "sea-borne terror", India has commissioned another coastal ship equipped with state-of-art equipment and radar.

The Varaha is fourth in the series of the seven off-shore patrol vessels (OPV) and will be based at New Mangalore, Karnataka.

"To achieve maritime supremacy, we need to ensure availability of world class assets in adequate numbers, comprising both, commercial vessels and warships," Singh said on Wednesday while commissioning the ship at the southern coast of Chennai.

The 98-metre OPV was designed and built by Larsen & Toubro Ltd. It is equipped to carry one twin-engine helicopter and four high-speed boats including two rigid hull inflatable boats. It is also capable of carrying pollution response equipment for oil spill and response at sea.

Defence sources say at least 60 ships and 16 aircraft are under construction at various shipyards or at aviation facilities.

Last month, Indian Navy chief Admiral Karambir Singh claimed the military possesses intelligence that the banned Jaish-e-Mohammed (JeM) group is training terrorists for carrying out a seaborne attack on India. Singh added that India's 'Make in India' programme would enable the domestic development of equipment and systems over the next 15 years.