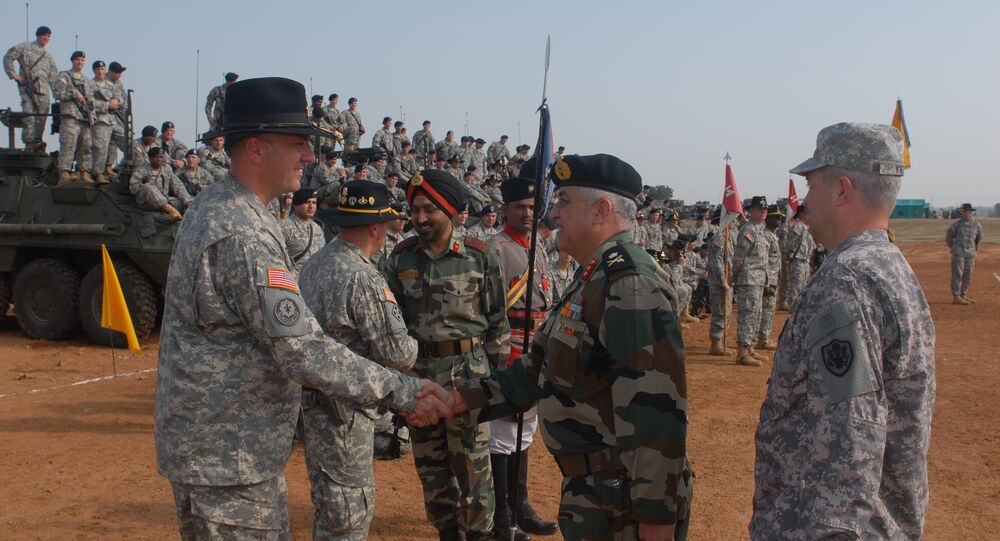 The US President's statement comes as Indian Prime Minister Narendra Modi arrives in the United States for a week-long visit.

President Donald Trump announced on Sunday that the US and India will hold joint military exercises called Tiger Triumph in November. These will be first drills for the two countries which will include three branches of their armed forces.

"In November, India and US will hold a first-everjoint tri-service event. Very soon several defence deals would be signed between India and US to bolster our security relationship", Trump said.

While previously both countries engaged in bilateral war games, India has previously conducted full-scale triservice military exercises only with Russia. Now, the army, the navy, and the air forces of India and the US will act simultaneously.

© AFP 2020 / RAVEENDRAN
An Indian soldier stands guard in front of the first of the six C-130J Super Hercules, a US military aircraft manufactured by Lockheed Martin. (File)

The head of the Indian government has a wide range of issues to discuss with American officials during his visit. The list includes trade, escalating tensions in Kashmir, relations with Pakistan and economic cooperation with Washington.

Trump previously met with Pakistani PM Imran Khan and held talks, discussing the situation in Kashmir, which New Delhi and Islamabad both claim as their territory.

Khan even pleaded for the US President to mediate in the dispute, but the offer met with a controversial reaction in both India and Pakistan. At first, Trump was supportive of the idea, but he later decided that both countries could resolve the problem themselves.