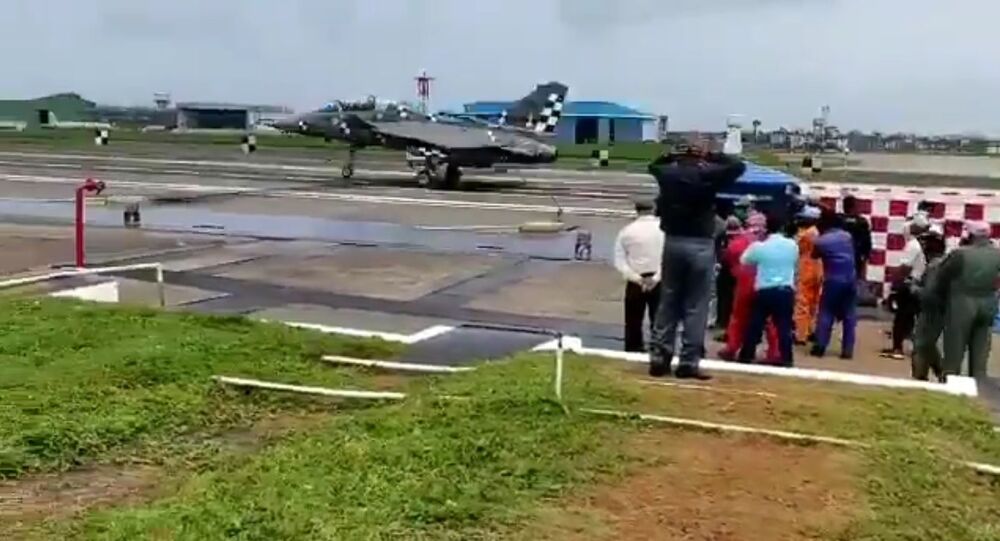 New Delhi (Sputnik): India's home-grown naval modified light combat aircraft (LCA-Navy),once considered as a dead project after the Indian Navy rejected it in 2016, successfully cleared the critical hurdle of an arrested landing test at a shore-based facility, INS Hansa, in Goa, inching closer to the goal of operating from an aircraft carrier.

The successful execution of an arrested landing will "pave the way for this indigenous platform to undertake Aircraft Carrier landing demonstrations" onboard the Indian Naval Aircraft Carrier - Vikramaditya.

"This arrested landing heralds the arrival of true indigenous capability and displays the professional prowess of our scientific community," an official statement said.

With the "textbook" arrested landing, India has joined the elite group of countries that have developed fighter jet technology to perform an "arrested landing". Presently, countries such as the US, Russia, the UK, France and, China possess this technology.

The fighter jet, once considered a dead project after the Indian Navy rejected it in 2016, is now expected to make an actual landing on India's only operational aircraft carrier, INS Vikramaditya soon.

The manufacturer Hindustan Aeronautics Limited also hopes that the two LCA-Navy prototypes will begin flight-tests such as landing, refuelling and taking off by the end of 2019.

LCA (Navy) features reinforced landing gear needed to absorb the forces exerted by the ski jump ramp during take-off, it can be airborne within 200 m compared to the 1000m required on standard runways.

Its special flight control mode allows hands-free take-off reducing pilot workload, as the aircraft leaps from the ramp and automatically enters into an ascending trajectory.

​The Indian Navy has been scouting for 57 fighter jets for its aircraft carrier and received quotes from four firms namely- Boeing Defence, Rosoboronexport, Dassault Aviation and Saab- in a  $15 billion tender. Solicitation issued in 2017 had asked global vendors to propose fighter jets with the capability to perform Short Take-offs But Arrested Recovery (STOBAR) or Catapult Take-off But Arrested Recovery (CATOBAR) operations, or both.

The selected aircraft will operate from indigenously developed IAC-1 aircraft carriers which will feature conventional ski-jump based STOBAR layouts and the INS Vikramaditya.