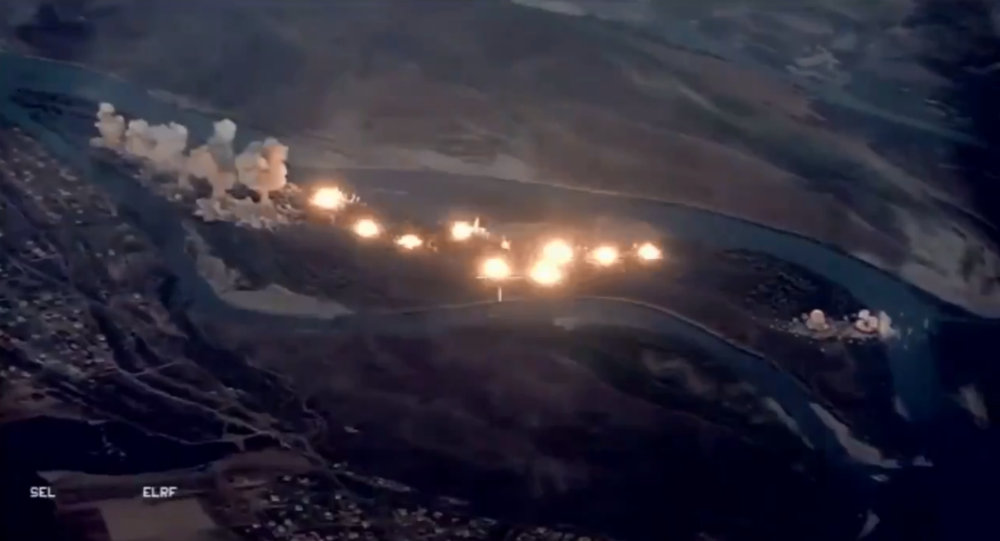 Coalition forces and the Iraqi Counter-Terrorism Service on Tuesday carried out a series of airstrikes across Qanus Island along Iraq’s Tigris River in an attempt to oust Daesh militants believed to be setting up camp in the region.

Video shared by Col. Myles B. Caggins III, the spokesperson for Operation Inherent Resolve (OIR) - the US’ ongoing mission to deter the rise of Daesh forces in Iraq and Syria - shows multiple fireballs erupting moments after projectiles are deployed onto the island.

The munitions ejected onto the “Daesh-infested island” came from the service’s twin engine McDonnell Douglas F-15 Eagles and its fifth-generation, all-weather F-35 jets, according to Caggins.

​According to an OIR statement, coalition forces deployed a total of 80,000 pounds of munitions in an effort to “disrupt Daesh ability to hide in the [island’s] thick vegetation.” The airstrikes were followed up by ground clearance operations, which were carried out by the 2nd Iraqi Special Operations Forces Battalion.

“We’re denying Daesh the ability to hide on Qanus Island,” Maj. Gen. Eric T. Hill, commander of the Special Operations Joint Task Force, said in a statement. “We’re setting the conditions for our partner forces to continue bringing stability to the region.”

​The OIR release indicates that the island is often used as a “major transit hub” for Daesh members moving from Syria and the Jazeera desert into the Mosul, Makhmous and the Kirkuk region.

The island is located near the Qayyarah West Airfield, which was used by US forces between 2003 and 2011; however, it was taken over by Daesh militants in 2014. The base was recaptured in 2016 by Iraqi forces.