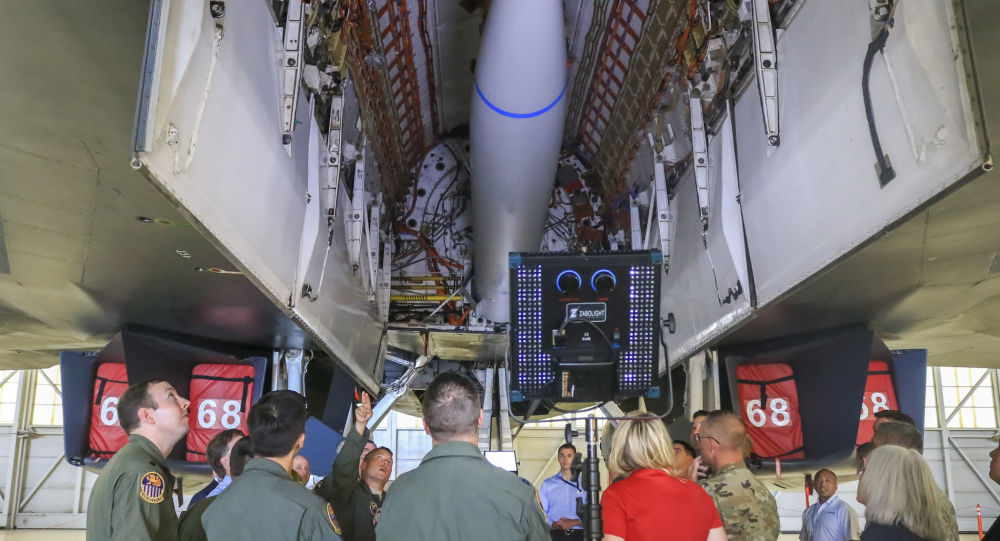 On August 28, the US Air Force held a demonstration for industry partners to reveal two potential expansions to the B-1B Lancer: external carriage and an extended weapons bay.

AFGSC Lt. Col. Dominic Ross, the B-1B program’s element monitor, explained to The Drive that the B-1B, which was originally designed decades ago to carry nuclear warheads, has a movable bulkhead that can be shifted by the crew without making permanent changes to the aircraft.

“Currently we can carry 24 weapons internally, now it can be increased to potentially 40 based on what type of pylon we would create,” Ross said. “This gets the B-1 into the larger weapons, the 5,000 pounders. It gets it into the hypersonics game as well.”

According to the AFGSC, the modification would only take a few work shifts to equip the long-range bomber to carry hypersonic missiles.

“It would allow us to more efficiently plan for targeting and use fewer aircraft with fewer aircrews in harm’s way to strike the same number of targets,” Col. Richard Barksdale told The Drive. He also explained that this would reduce the amount of support aircraft needed.

Ross asserted that the military would only use these developments and potential modifications for conventional warfare, to remain compliant with New START.

"The New START nuclear agreement, which was ratified in 2010, was flawed from the beginning. It did not cover short-range tactical nuclear weapons or new Russian delivery systems. It is due to expire in February 2021, and while no decision has been made, it is unlikely to be extended. Why extend the flawed system just to say you have a treaty?" Bolton said during a speech to attendees of the 41st annual National Conservative Student Conference.

Bolton has since been removed from the Trump administration after the US president announced that he “disagreed strongly with many of his suggestions” in a Tuesday tweet. Longtime defense contractor and United States Deputy National Security Adviser Charles Kupperman has been appointed to fill Bolton’s former position in the interim.

Vladimir Yermakov, director of the Russian Foreign Ministry's Department for Non-Proliferation and Arms Control, told Sputnik on August 15 that it is “hard to perceive” the US’ comments concerning the treaty as anything other than an attempt to “build up its nuclear arsenals, regardless of the detriment to strategic stability and international security.”

US to Create Hypersonic Weapon Within 'Couple of Years' - Defence Secretary