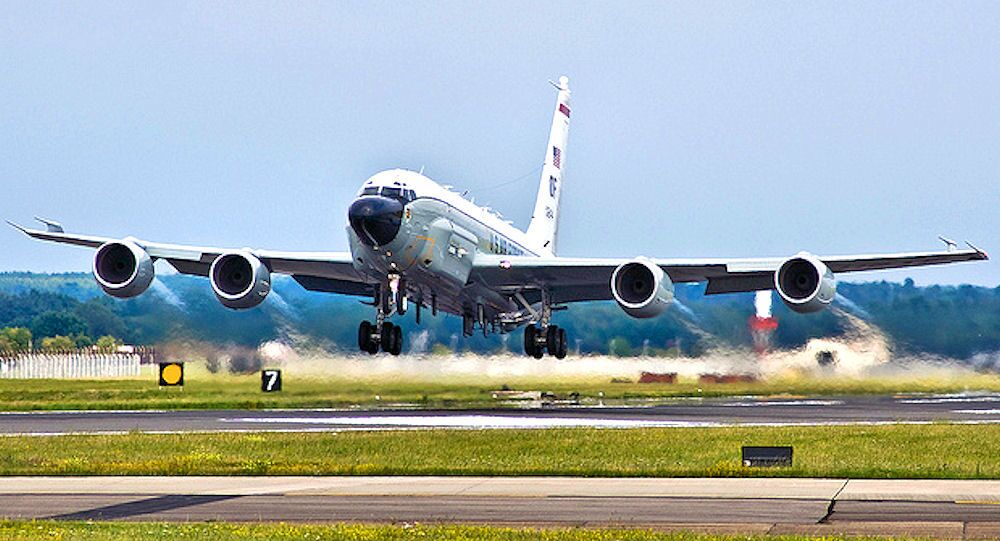 An RQ-4B Global Hawk, a strategic unmanned aerial vehicle of the US Air Force, reportedly carried out an 11-hour reconnaissance flight near Russian borders in the Baltic region.

The US Air Force’s RC-135U reconnaissance aircraft has conducted a multi-hour flight along the Russian coast in the Black Sea, according to the flight tracking website PlaneRadar.

The plane, which lifted off from the Souda Bay air base on the Greek island of Crete earlier on Thursday, flew over the coast of Krasnodar as well as the southern and southwestern coasts of Crimea.

The aircraft then flew on for at least three hours southwest of Crimea, near the city of Sevastopol.

“The Boeing RC-135U plane conducts a reconnaissance flight along the Black Sea coast of Russia”, the tweet reads.

The flight was reportedly carried out over the international waters of the Black Sea at an altitude of 9,600 meters.

PlaneRadar also tracked a flight by the UK Royal Air Force’s RC-135W spy plane near to Russian borders in the Baltic.

"The Boeing RC-135W aircraft carries out a reconnaissance flight in the flight information area in the Kaliningrad region," according to a tweet.

After taking off from RAF Waddington air base in England on Thursday, the plane conducted a surveillance mission over the Baltic Sea in Lithuanian airspace near the borders of Russia’s Kaliningrad region.

The flyovers come after PlaneRadar reported an almost 11-hour reconnaissance flight carried out by the US drone RQ-4B Global Hawk near Russian borders in the Baltic region.

The unmanned aerial vehicle (UAV) lifted off from the Sigonella airbase on Sicily and then flew along the northern border of the Kaliningrad region, as well as the western borders of Russia’s Pskov and Leningrad regions.

"The UAV RQ-4B-40 Global Hawk with board number 11-2048 and the callsign FORTE15 took off from the Sigonella airbase," the tweet reads.

The US and NATO have substantially increased their reconnaissance operations along Russia's borders in the Black and Baltic Seas in recent years.

Over the past year alone, the Russian military's reconnaissance forces reportedly tracked about 3,000 foreign combat aircraft, including around 1,000 spy planes and reconnaissance drones, flying near to Russia's sea and land borders. Over the same period, Russian planes were scrambled repeatedly to intercept the aircraft, forcing them to alter course.