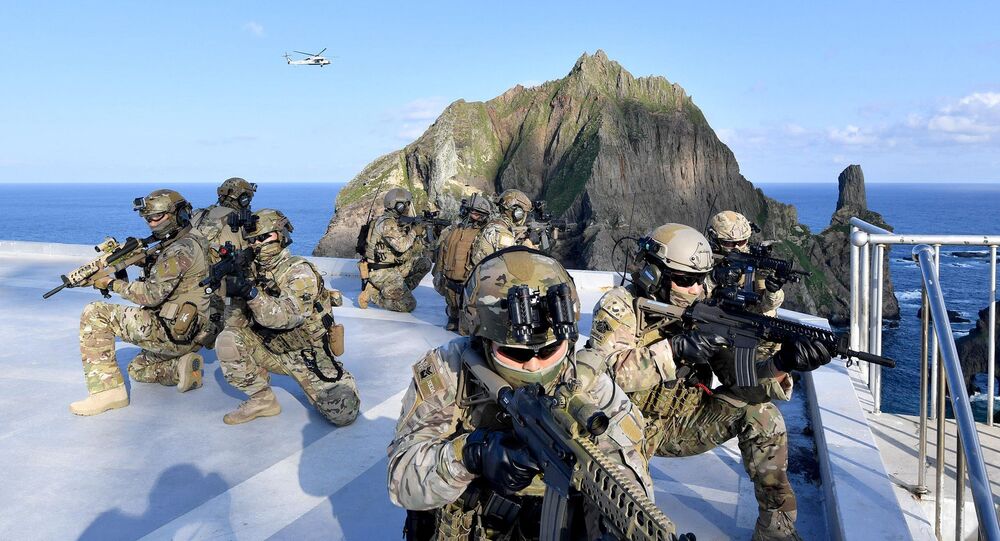 MOSCOW (Sputnik) - South Korea is holding the second and final day of its drills in the area of the Liancourt Rocks islands, which are disputed by Japan, by doubling the forces involved in what is seen as a major show of force amid growing tensions with Tokyo, the Yonhap news agency reported.

According to the agency, citing the Navy, 10 naval ships — including a 7,600-tonne Aegis-equipped destroyer — and 10 jets took part in the first day of the drills. On Monday, the number of armed forces dispatched is set to be nearly twice as high, the Navy said.

The military also noted that the renaming of the exercise from the Dokdo Defence Drills to the East Sea Territory Protection Exercise reflected "the significance and the scale of this exercise that aims to further consolidate the determination to defend our territories in the East Sea, including Dokdo," the media outlet added.

South Korea began its two-day military exercises on Sunday. Tokyo has swiftly expressed protest over the "unacceptable" drills, "strongly" calling for their cancellation. The drills come amid a row between Tokyo and Seoul, which was recently deepened over the issue of compensation for the use of forced labour by Japan during World War II.

The rift has since expanded to mutual trade restrictions and even defence cooperation, with South Korea refusing to extend the intelligence-sharing agreement with Japan.

The Liancourt Rocks islands also referred to as Dokdo by South Korea and Takeshima by Japan, lie almost equidistant from the two states. They have been administered by Seoul since 1954, a claim Japan disputes. Tokyo has suggested that Seoul should present the issue to the International Court of Justice.

However, South Korea believes there is no dispute over the islands and considers them to be its territory historically, geographically and legally.