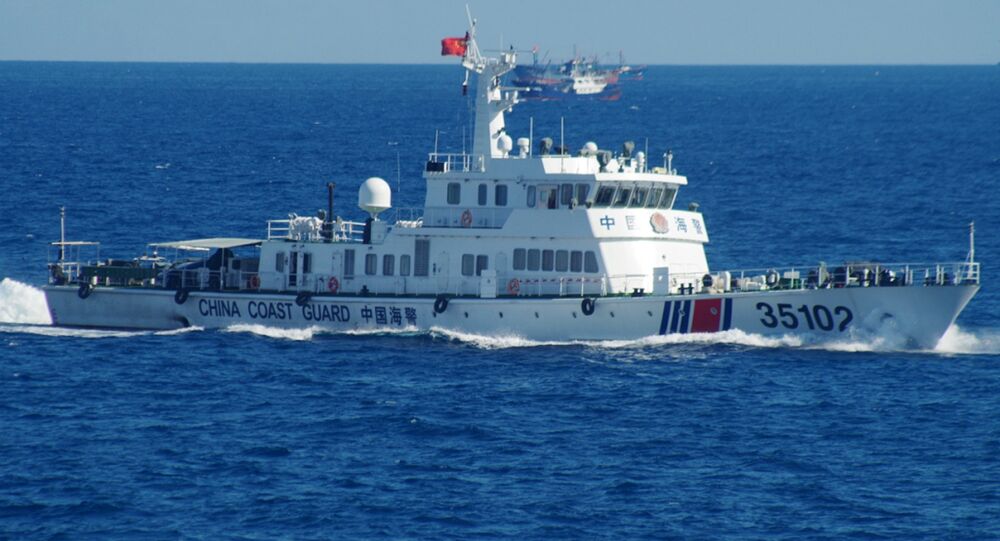 New Delhi (Sputnik): India's state-funded Oil and Natural Gas Corporation (ONGC) has been carrying out oil exploration in the contested waters of the South China Sea. Sources said it is the third significant intrusion in 2019 into Vietnam's exclusive economic zone by China, noting that the last incident involved 20 Chinese ships.

Hanoi has accused China of placing its coast guard's ships near Indian commercial interests in the South China Sea, and Vietnamese diplomatic sources say their country is mulling options for countermeasures through the UN Security Council (UNSC).

The Chinese deployment is near state-funded ONGC Videsh Ltd, which shares interests in its oil block with Russia's Rosneft in the economic zone.

Sources said it is the third significant intrusion of 2019 into Vietnam's exclusive economic zone by China with the latest incident involving the intrusion of 20 Chinese ships.

"This is the 2nd intrusion by the Chinese this year, and it began on 13 August at 1500 hours local time," sources stated, adding that the second intrusion involved six coast guard ships, 10 fishing ships and two service ships along with an H6 bomber, fighter aircraft and mid-air refuelers that had been spotted flying over the economic zone.

Sources emphasised that Chinese deployments during the first incursion on 3 July were withdrawn after the ASEAN foreign ministers meet on 1 and 2 August.

"Very well-calculated action and at the Bangkok meeting, the Chinese side said there is peace and security in the region; deep down this is the destruction of freedom of navigation," the source added.

"Just follow the same China Pakistan model at the UNSC…if Pakistan can take a bilateral issue to the UNSC, [well then] the South China Sea is still an international issue," a diplomat said.

Vietnam has also informed the Indian and Russian governments of the development.

China claims almost all of the strategic South China Sea, which is bordered by Brunei, Indonesia, Malaysia, the Philippines, Taiwan and Vietnam, brushing aside all competing claims to the resource-rich marine region.

Last month, India's Ministry of External Affairs said that New Delhi stands for the peaceful resolution of disputes, including through respect for legal and diplomatic processes, and that India is against resorting to the threat or use of force, under international laws.