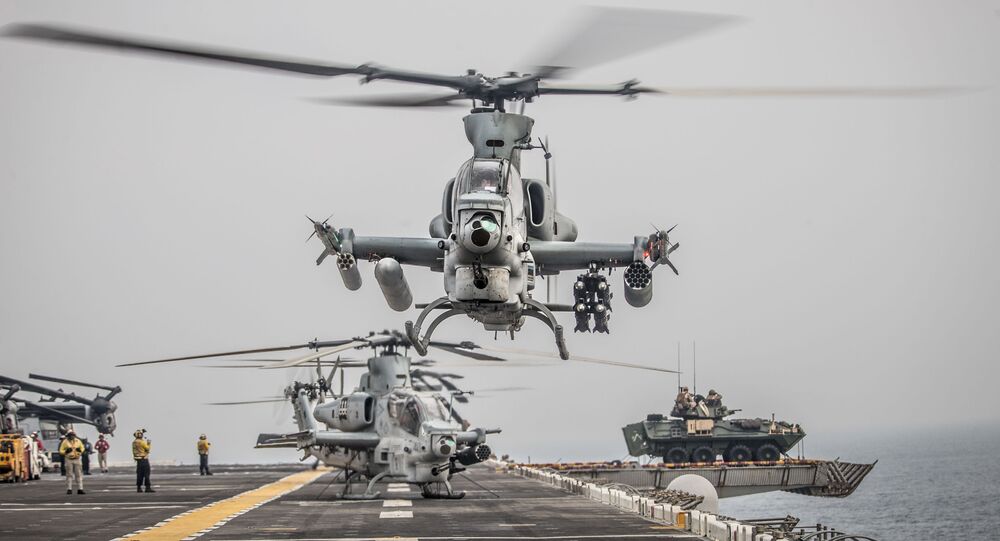 When the amphibious assault ship USS Boxer transited the Strait of Hormuz earlier this week, it had a light armored vehicle strapped to its flight deck. The novel innovation reflects the US Marine Corps’ lack of preparation to counter emerging surface threats.

The 11th Marine Expeditionary Unit (MEU) decided to strap one of its LAV-25 armored fighting vehicles to the flight deck of the USS Boxer earlier this week as the ship was preparing to enter the narrow Strait of Hormuz.

Evidence came in the form of a US Navy photo of AH-1Z Viper attack helicopters lifting off from the Boxer’s flight deck, with the armored vehicle sitting in the background of the image.

While no service spokesperson has commented on the practice, it was reported last December that the Corps had performed the maneuver at least once before.

Speaking at the Hudson Institute in November 2018, Marine Maj. Gen. David W. Coffman, director of Expeditionary Warfare for the Chief of Naval Operations, told the audience that he had “watched a MEU commander strap an LAV to the front of a flight deck because it had better sensors than the ship did to find small boats.” He called the action “creative.”

While the 40,000-ton USS Boxer, which is effectively a mid-sized aircraft carrier that also transports thousands of Marines and their equipment, sports many kinds of sensors and radars, as well as missile systems and close-in weapons systems to fend off a great variety of foes, the LAV-25 carries some unique kinds of sensory equipment that could prove useful in a waterway like the Strait of Hormuz.

Iranian naval forces tend to prefer small patrol craft to large warships, and the reconnaissance version of the LAV-25 is equipped with the AN/PPS-5C radar, which is used to acquire artillery targets and is designed to track aircraft, vehicles and troops. According to maker Leonardo DRS, the radar has a range of between 100 meters and 27 kilometers, meaning it can likely detect small craft close to the ship that the bigger-minded radars on the Boxer might miss.

Capt. George McArthur, a spokesman for the 31st MEU, told Marine Corps Times last December about an exercise the previous September in which Marines aboard the Boxer’s sister ship, the USS Wasp, had strapped an LAV-25 to the flight deck to simulate passage through another dangerous waterway fraught with small boats: the South China Sea.

“This was the first time that an LAV-25 platoon with the 31st MEU performed this level of integrated targeting and live-fire from the flight deck of a ship such as the Wasp with combined arms," McArthur said. However, in that exercise, the Marines made use of the armored vehicle’s M41A4 SABER optical targeting system, used to spot targets for its TOW missiles.

Using land vehicles onboard sea vessels is becoming a regular practice in the Corps: in October 2017, Marines fired rockets from the high mobility artillery rocket system (HIMARS) from the deck of an amphibious transport dock, the USS Anchorage, at a land-based target.