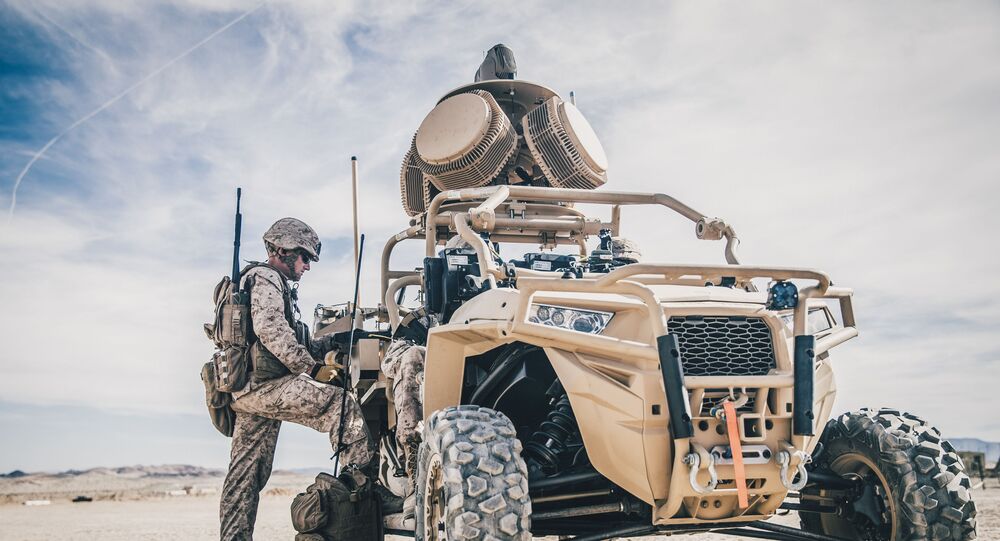 The Light Marine Air Defense Integrated System (LMADIS) system was designed for ground use aboard Marine buggies. The Navy deployed those buggies aboard its ships to check if the system would work on water as well.

The new Marine anti-drone electronic warfare system was allegedly used in the takedown of an Iranian drone on Thursday, Military.com learned from an anonymous defence official.

According to the report, the system is called Light Marine Air Defense Integrated System, or LMADIS, and is portable enough to be installed on large all-terrain vehicles (ATV), such as the Polaris Defense MRZR buggy.

The LMADIS is an array of several round devices that resemble cellular antennas in a circular arrangement to provide 360-degree coverage, topped with a video camera.

“the system has been successful against a range of small commercial systems... which suggests its strength is in its flexibility and modular nature”: https://t.co/25vrIviWrY @C4ISRNET #CUAS #LMADIS #MarineCorps pic.twitter.com/VjqZb23kg4

​The report says LMADIS typically consists of two buggies: a command vehicle and an electronic warfare platform. Initially designed for ground operations, the system was recently installed on several Navy ships for testing.

The system uses radar and cameras to detect drones in the sky, and, once a threat is found, emits radio frequencies that jam drone control, according to the C4ISR May report.

The buggies are a part of the California-based 11th Marine Expeditionary Unit deployed to the Middle East, the Military.com report says.

On Thursday, US President Donald Trump said an Iranian drone was shot down by a system deployed aboard the USS Boxer, a Wasp-class amphibious assault ship.

"This is the latest of many provocative and hostile actions by Iran against vessels operating in international waters," the president said. "The United States reserves the right to defend our personnel, our facilities and interests and calls upon all nations to condemn Iran's attempts to disrupt freedom of navigation and global commerce."

Later in the day, the Iranian Foreign Ministry claimed they had no knowledge of their drone being taken down by the United States.

"We have no information about having lost the drone today", Iranian Foreign Ministry Mohammad Javad Zarif told reporters.

Earlier this year, Iran air defence shot down a US drone it claims had violated Iranian airspace. The incident brought to a head, months of rising tensions due to Washington’s “maximum pressure policy.”

The Iranian Foreign Minister, Mohammad Javad Zarif, acknowledged that the incident has put the two nations on the brink of war, which was averted after Trump purportedly made a decision not to retaliate militarily.