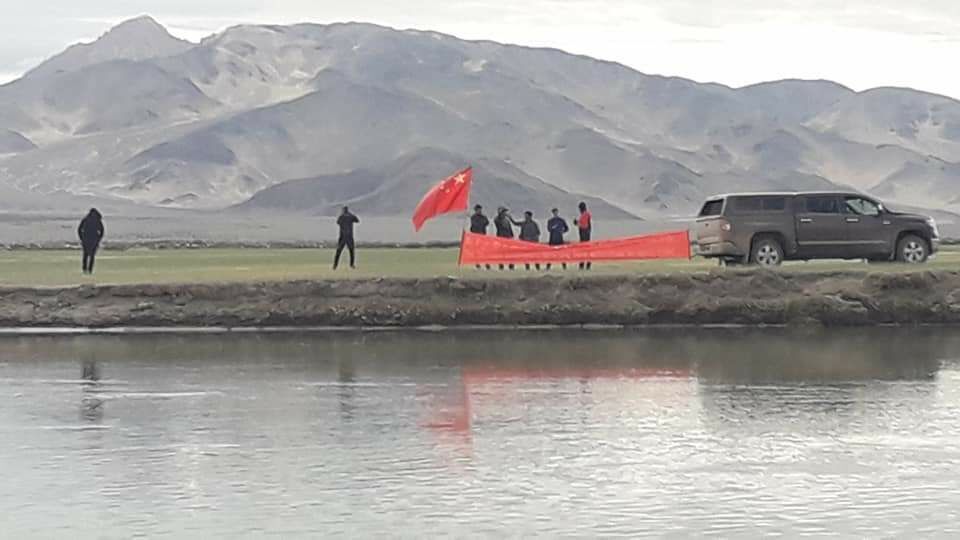 Chinese troops appeared to have entered India's Koyul Village, which is located near the Line of Actual Control (LAC), which divides the country from China.

New Delhi (Sputnik) - A number of Chinese troops recently interrupted an annual celebration of the birthday of the Tibetan Spiritual Leader, the Dalai Lama, on 6 July at a village in the Ladakh region of the Indian state of Jammu and Kashmir.

It was learned that the troops were provoked when they noticed Tibetan flags on display and came to object to them. Later, before leaving Koyul Village near Demchok in Eastern Ladakh, they unfurled their Chinese flag there.

According to Indian government sources, 11 Chinese troops arrived in two vehicles and stopped on the Indian side close to Line of Actual Control (LAC) for about 40 minutes.

The Chinese military did not comment on the matter in official meetings with Indian counterparts, the sources added. The incident happened two years after the Doklam conflict.

“Chinese troops in plainclothes arrived in vehicles close to the LAC and protested that Tibetans were celebrating the Dalai Lama’s birthday on July 6. They displayed banners to the villagers which read ‘Ban all activities that divide Tibet’,” government sources aware of the incident said on Friday.

However, according to Urgain Chodon, the village head of Koyul, and a member of India's ruling Bharatiya Janata Party, the Chinese troops were kilometres into Indian territory when locals of Koyul, Demchok and Dungti areas were celebrating the Dalai Lama’s birthday.

"It's a customary celebration which has been celebrated for many years and on this day we raise the national flag, the Buddhist flag and the Tibetan flag. This time China  came six kilometres into our territory, saying we were provoking them and told us not to put up the flag," Chodon, the village head, said while claiming to have officially shared details of the incident in a letter to Prime Minister Narendra Modi, the Home Minister Amit Shah and the Defence Minister Rajnath Singh.

"Government should take action against this Chinese encroachment. It is a very serious matter and this time they encroached on new territory called the Kabzung valley," Rigzin Spalbar, Chief Executive Councillor of Ladakh Autonomous Hill Development Council, told Sputnik.

“Not speaking out against the Chinese and hiding the truth is actually emboldening them,” Spalbar added.

Local Indian leaders questioned the intention of Chinese troops, asking:  "Why did they come themselves when we have telecommunication facilities with them. They should have informed our (Indian) forces."

"They have a hidden objective to occupy our winter pastures land where our forefathers and we all (Changpas) shift for winter grazing," the village head added.

Local residents claimed earlier this year, that Chinese troops made a road near the line of actual control (LAC) - a loosely demarcated border between India and China.

They have urged regional as well as national leaders to "intervene in this matter of great national security importance " stressing that it is vital for the survival of the Changpas and their livestock and that it is necessary to give them a sense of security near the Line of Actual Control (LAC).

This is the first major ingression from the Chinese side after the 73-day Doklam stand-off in Sikkim sector in the summer of 2017.

Bilateral relations between the two countries had suffered a sharp decline and all but reached a near armed conflict during the stand-off. The tension was de-escalated only after the Wuhan Informal summit between Indian Prime Minister Narendra Modi and Chinese President Xi Jinping was held on April 2018.

Due to the past stand-off in the Demchok area, the Indian Army has deployed over 100 battle tanks to Indian's perceived border in eastern Ladakh.

In 2016, more than 50 Chinese troops tried to halt civil work in Demchok. Chinese forces claimed the work was taking place in a disputed area and, therefore, the local Indian authorities should have taken prior approval from higher authorities of both sides.

In 2013, more than a dozen Chinese troops crossed onto the Indian side of the LAC at Demchok and refused to leave the area for more than a week.