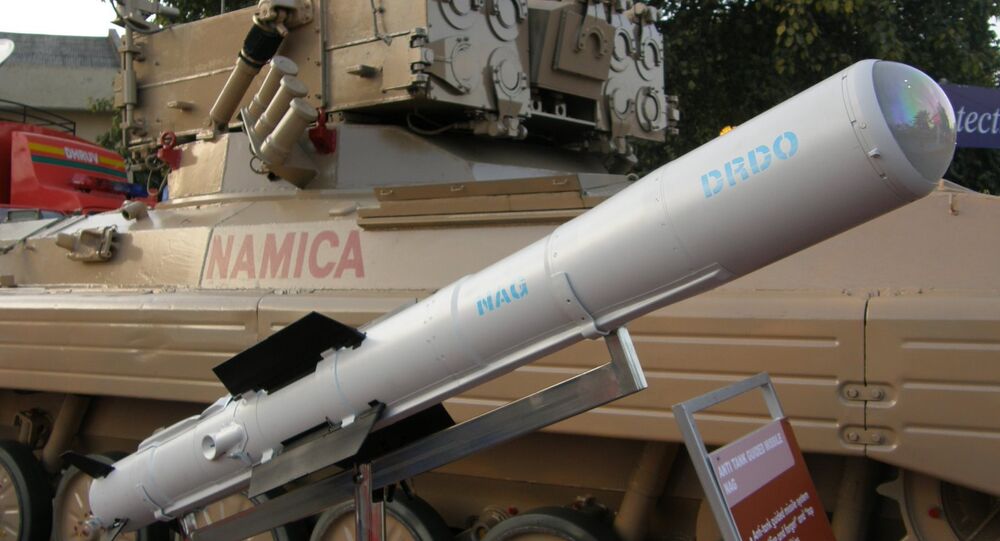 New Delhi (Sputnik): India’s defence scientists have commenced a series of last-leg trials of the indigenous “Nag” (meaning Cobra) anti-tank guided missiles ahead of their induction into the Indian Army.

Three successful tests were carried out on Sunday, with follow-up tests to further validate the capabilities of the Nag Missile Carrier (NAMICA) and mounted anti-tank guided missiles (ATGM) to be carried out on Monday, in Pokhran near the Pakistan border.

A Defence Research and Development Organisation (DRDO) official said: "the missiles were test-fired during both day and night, on Sunday during the trials".

The DRDO has been working on the Nag since 2009 and has spent approximately $47 million on its development. The missile with ‘fire and forget’ and ‘top attack’ capabilities, is deployed on a specially modified ICV BMP-2 vehicle called the ‘NAMICA’.

During Aero India 2019, the DRDO stated that Nag had successfully completed “Winter-use trials” in December 2018. The trials commenced after a protracted period of validation tests, in part due to the performance of the imaging infrared (IIR) seeker head.

The Nag is claimed to be one of few "fire-and-forget" anti-tank missiles, like the American Javelin, and the Israeli Spike. It is heavier than the Javelin and the Spike, both of which are man-portable.

Once launched, the Nag doesn't need to be guided, allowing the launcher to seek cover. The missile can use its autonomous onboard guidance to hit even a fast-moving tank. It uses indigenous image-seeking optical guidance, making it virtually jam-proof, unlike the infra-red seekers of the Javelin and Spike missiles.

The Indian Defence Ministry had cancelled the planned $500 million purchase of Spike anti-tank missiles from Israel's Rafael in favour of the DRDO's man-portable anti-tank guided missiles.

At present, India uses American, European, Israeli, Russian, and Soviet-made anti-tank missiles. The Nag is meant to phase out all of these foreign weapons as part of New Delhi's "Make in India" initiative.