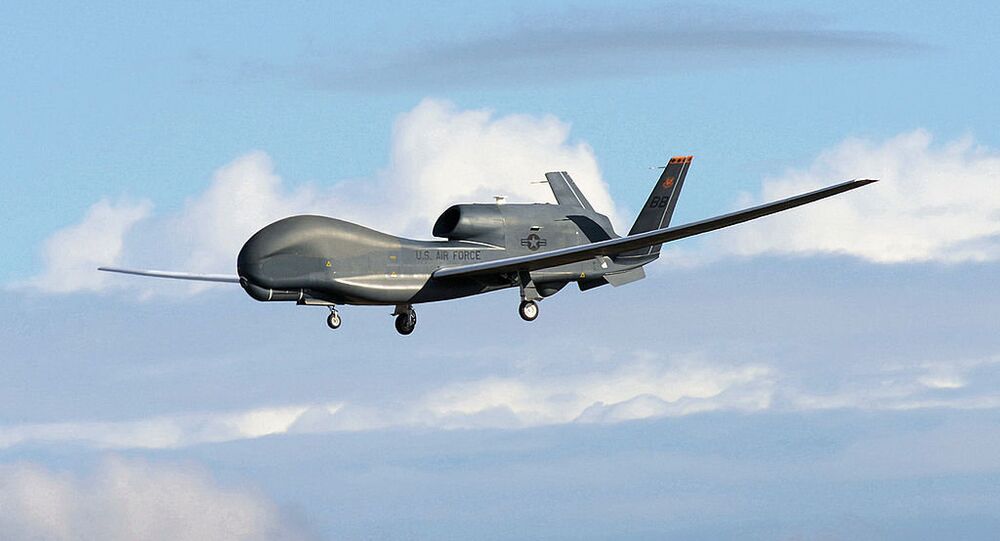 Already simmering tensions between the US and Iran nearly escalated into a direct confrontation following the Islamic Revolutionary Guard Corps' (IRGC) downing of a US Northrop Grumman RQ-4 Global Hawk spy drone flying over the coastal province of Hormozgan after it allegedly violated the country's airspace.

More than 10 years ago, the US Department of Defence was presented with an analysis of a hypothetical conflict with Iran by the Virginia-based aerospace and defence technology company Northrop Grumman, in which its RQ-4 Global Hawk surveillance drones might play a pivotal role.

"Deterring and, if needed, fighting a traditional theater conflict will remain a high priority for Combatant Commander. A hypothetical conflict with Iran in the 2015 to 2020 timeframe will provide a framework for discussion", a 2008 paper, "Global Hawk and Persisent Awareness", produced by the Northtrop Grumman Analysis Center, reads.

Likewise, Northrop Grumman came to the conclusion that seven to eight Global Hawk drones would be essential to accomplish surveillance missions in the event of a future conflict with the Islamic Republic, and recommended deploying at least 16 more UAVs to the region.

The manufacturer's document also lists other potential uses for the Global Hawks, including maritime operations and border security, and advises the Pentagon to purchase 157 of its drones.

A drone of the same model was downed by Iran's Islamic Revolutionary Guard Corps (IRGC), on 20 June after it violated Iranian airspace, in a "clear message" to the United States that Tehran would "react strongly" to any aggression, per the elite unit's commander-in-chief.

Washington came out with a contradictory claim, saying that its unmanned aircraft was hit while flying over international waters.

Ever since, both sides have released conflicting maps of the downed drone's reported flight path: most recently, Iranian Foreign Minister Javad Zarif has tweeted a new detailed map, showing the "location and point of impact of the US military drone".

​Meanwhile, the Pentagon earlier released an image purportedly showing that the Global Hawk was in international airspace over the Strait of Hormuz.

US President Donald Trump has called the drone's downing a "very big mistake" and later revealed that he called off a military strike against three sites in Iran 10 minutes before it was set to be carried out in retaliation for the shootdown. He explained that the decision to halt the attack was motivated by the fact that the death toll from the strikes would be disproportionate to the loss of an unmanned aerial vehicle.

The drone incident has added to the already escalated tensions between the United States and Iran that were dramatically exacerbated by Washington's dispatch of an aircaft carrier strike group and a bomber task force in a "clear and unmistakable message" to Tehran that any attack on American interests or those of its allies would be met with "unrelenting force".

The United States has recently upped the ante by accusing the Islamic Republic of being behind sabotage attacks against oil tankers off the UAE coast in mid-May and in the Gulf of Oman in early June. Iran, for its part, struck back by saying that the claims were unfounded and urged Washington to stop the "blame game", "warmongering" and false flag operations in the region.