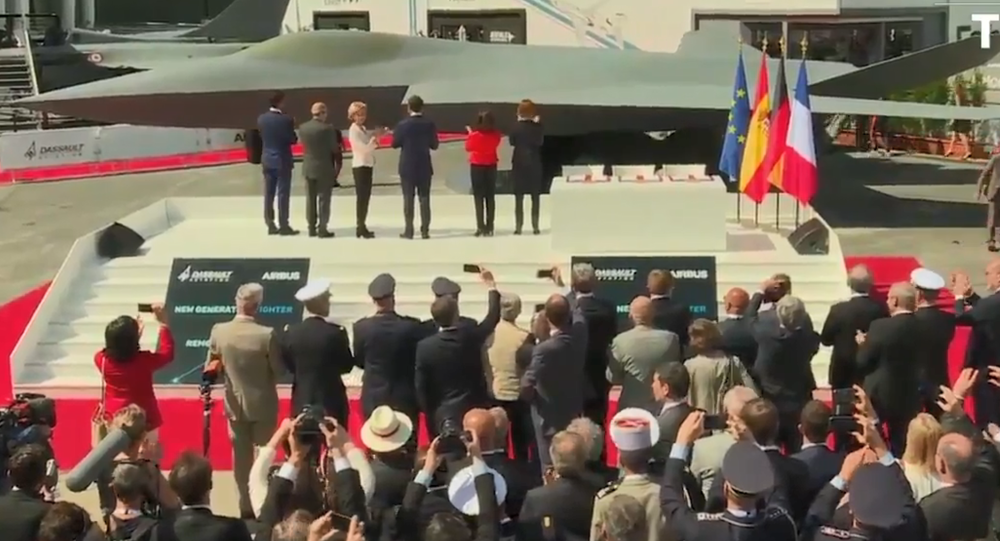 In front of a full-size, veiled mock-up of the Future Combat Air System, French, Spanish and German defense ministers signed an accord Monday on the development of the sixth-generation aircraft before dramatically unveiling the model. The FCAS is expected to become their mainstay fighter jet by 2040.

At the Paris Air Show on Monday, the defense ministers of France, Germany and Spain committed themselves to the development of the FCAS in front of a model of the futuristic fighter jet.

"In 2040, the French armed forces will be equipped with a combat aircraft, built between Europeans, to face the fights of tomorrow," French Defense Minister Florence Parly said, adding, "This is historical, and that's just the beginning.”

The FCAS will be the latest in a line of aircraft jointly produced by European powers. Other planes developed and used by multiple European nations include the Panavia Tornado, the Eurofighter Typhoon and the SEPECAT Jaguar.

VIDEO: A full-scale model of the Future Combat Air System (#FCAS) jet is unveiled at the #ParisAirShow in front of the defence ministers of France, Germany and Spain and French President Emmanuel Macron. #ParisAirShow2019 pic.twitter.com/x3XRWGmfMV

​​​The plane will represent a qualitative leap ahead of present-day top-of-the-line jets like the F-35 Lightning II and J-20, which are referred to as fifth-generation jet aircraft. They have capabilities like look-down shoot-down and stealth technology, and they rely to an unprecedented degree on software to manage flight processes and communication.

While fifth-generation is itself an ill-defined term coined by F-22 and F-35 maker Lockheed Martin partly as a marketing ploy, sixth-generation is even less well-defined. A definition fielded by the US Air Force in 2010 included "enhanced capabilities in areas such as reach, persistence, survivability, net-centricity, situational awareness, human-system integration, and weapons effects,” and noted “it must be able to operate in the anti-access/area-denial environment that will exist in the 2030-2050 timeframe."

​​​In addition, French Air Force Chief of Staff Gen. Philippe Lavigne told reporters in February the aircraft would be “optionally manned,” similar to the US’ upcoming B-21 Raider project.

The FCAS initiative was first announced in July 2017, although talk began as early as 2012, Sputnik reported.

Aircraft makers Airbus and Dassault Aviation signed an agreement on joint production of the FCAS in April 2018, although a constellation of other defense companies will also be involved. In February, the two companies signed a $74 million contract for a two-year study to figure out who’s going to build or design what parts of the plane, beginning with the French Safran Aircraft Engines and German MTU Aero Engines, which agreed to design the jet’s propulsion system, according to Breaking Defense.

However, that same month, a confidential cable sent by the German ambassador to France that was leaked to Der Spiegel revealed the nascent program was in a state of crisis after the countries couldn’t agree on how to handle exporting the plane once it’s complete.

It’s expected a flying model of the FCAS will be ready by 2026.

Missing Indian An-32 Aircraft Located After Days of Searching