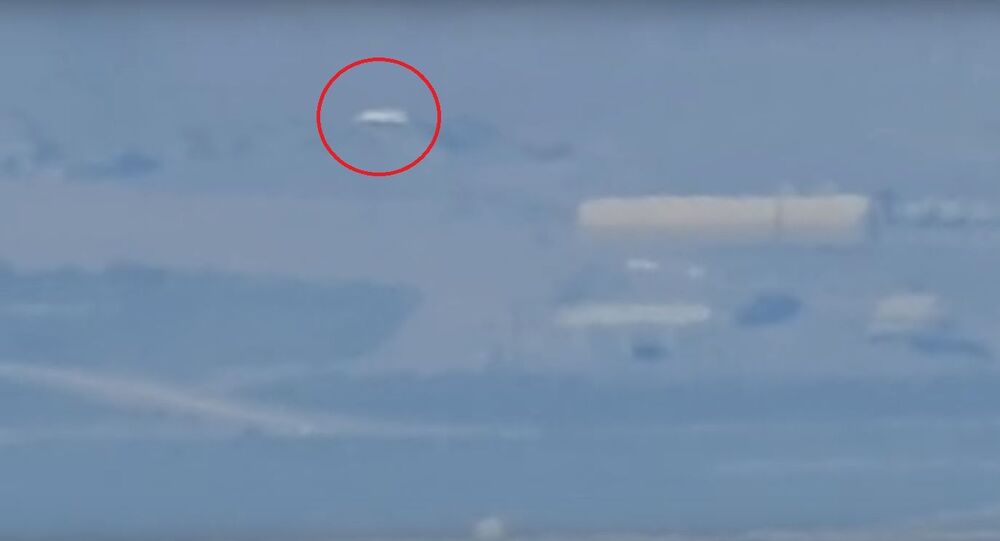 The secret base in the US state of Nevada, which is reported to have undergone quite a few technical changes, continues to be on everyone’s lips, despite the government’s revelation in 2013 that it is indeed a secret intelligence-related hub. However, it is the frequent sightings of weird objects in the area that generates the most speculation.

A YouTuber, who regularly posts videos on an account titled Adventures with Christian, has filmed an unidentified flying object from atop a mountain overlooking the secret US air base Area 51, which, speculators, interestingly, claimed had long been shut down. All the same, Adventures with Christian happened to catch sight of helicopters and planes whizzing past the mysterious base, as well as trucks driving nearby.

11 minutes into his 22-minute video, a bizarre floating white object can be clearly seen near a plane entering a 250-foot hangar, the first massive change made to the base in the last 10 years.

Meanwhile, a helicopter is also visible – an HH-60 Pave Hawk chopper that provides security for Area 51 – suddenly emerging near the edge of another mountain between Tikaboo Peak and the base, which was built in 1955 by the CIA for the purpose of developing cutting-edge reconnaissance aircraft.

After Christian, accompanied by his son Sean, climbed the rock, he caught a glimpse of a blurry, whitish object moving to the left of the hangar; however, the video doesn’t clearly show whether the object was hovering.

“This is very exciting for me”, Christian is heard saying in the footage, as another jet is then filmed travelling in the opposite direction, along a runway.

A separate hour-long video outlines the details of the YouTuber’s climb up the mountain peak, as well as explains his use of rocks and tape to remember his route back. Although by the time they reached the top, clouds had amassed blocking their view, although the sky eventually cleared up enough for the father and son to see the air base, including trucks moving around, and the aircraft – a Janet plane used to ferry workers between a special section of McCarran International Airport in Las Vegas and the base at Groom Lake.

The base, codenamed Area 51, was kept under wraps until June 2013, when the government admitted its existence following a 2005 Freedom of Information request. Although shrouded in secrecy, the base is believed to still develop high-altitude CIA spy plane technology, not infrequently associated with alien spaceship designs, with conspiracy theorists claiming that the place is where UFOs are or will be taken, should they land on Earth.