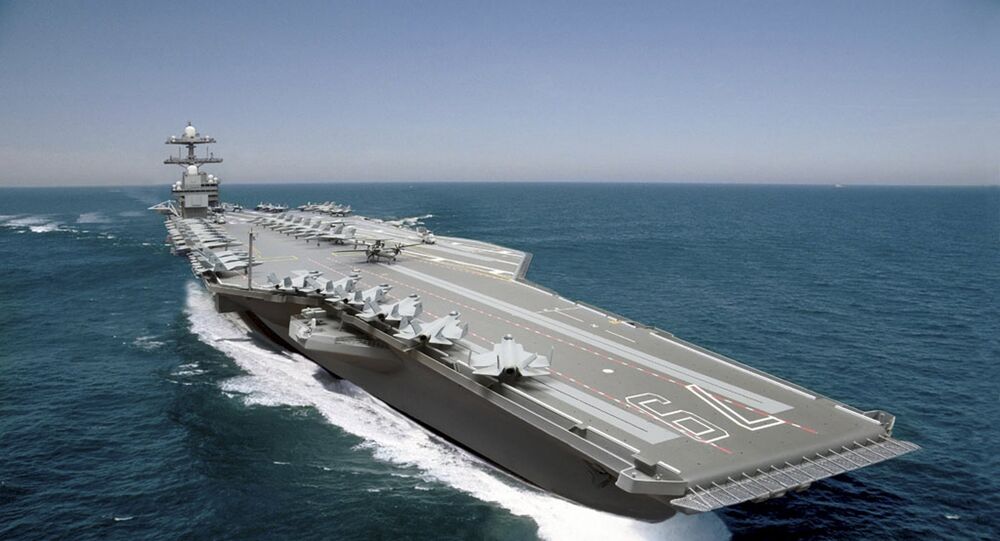 The Pentagon's all-in-one fighter has faced criticism over a bevy of technical issues, design problems and cost overruns, with Acting Defence Secretary Patrick Shanahan once calling it "f***ed up" and boasting that Boeing could have done a much better job. But the new class of carriers meant to carry the F-35 seems to have problems of its own.

Lawmakers from the House Armed Services Committee's Subcommittee on Seapower and Projection Forces find it "unacceptable" that the USS John F. Kennedy, the second ship in the new Ford-class of supercarriers, won't be able to deploy with F-35C jets onboard once the vessel is delivered later this year, a staffer has said, according to USNI News.

Earlier, Congress imposed an $11 billion cost cap on the ship in an attempt to keep costs from skyrocketing, prompting the Navy to create a workaround in which they would commission unfinished ships and fit them with the necessary capabilities at a later date.

"[The USS John F. Kennedy] will not be able to deploy with F-35s when it's delivered to the Navy as a direct result of that cost cap. So when that cost cap was imposed, the Navy traded that capability off and chose to build that back in on the back end. That's unacceptable to our members that the newest carriers can't deploy with the newest aircraft," the staffer said, speaking to reporters.

© AFP 2019 / JEFF J MITCHELL / GETTY IMAGES NORTH AMERICA
Lockheed Martin Delivers 400th F-35, Hits 200,000 Flight-Hour Mark
The staffer added that the fighter issue was just one example of the practice of deferring the completion of work until after the ship's delivery into the Navy.

In its Fiscal Year 2020 National Defence Authorization Act review, the subcommittee included language to prohibit the Navy from taking delivery of the new carrier unless it can carry the F-35s.

The USS Gerald R. Ford, the first ship in the Ford-class, has faced its own range of technical issues, with its post-shakedown availability period, meant to correct various deficiencies and make improvements, facing repeated delays. In late March, US Navy Assistance Secretary for Research, Development and Acquisition James Geurts told the House subcommittee that the Ford wouldn't be able to make the initially set July deadline to complete the review, saying that issues including a faulty nuclear propulsion system and problems with its weapons elevators were still plaguing the vessel. Last week, Geurts offered an update, saying that only two of the 11 weapons elevators were working properly.

The $13 billion Ford, the most expensive warship in US history, was delivered to the Navy in 2017, but has faced a range of technical problems ever since, including issues with its electromagnetic aircraft launch system and the advanced arresting gear allowing jets to decelerate as they land on the carrier's deck.

© Photo : Wikipedia/U.S. Navy
‘Shock Trials’ Argument Latest Snag in $13B Saga of Ford Class Aircraft Carrier
The Navy ordered two more Ford-class carriers in January, bringing the total ships commissioned, under construction or ordered up to five, and the Navy mulling five more. The USS John F. Kennedy is expected to be launched later this year and commissioned in 2024.

Four hundred F-35s have been delivered to various branches of the US military and the militaries of its allies. Earlier this year, the Project on Government Oversight watchdog complained that the US Navy's F-35 fleet was nowhere near normal operational status, saying the planes were unprepared "to face current or future threats" and potentially dangerous for the personnel operating them.