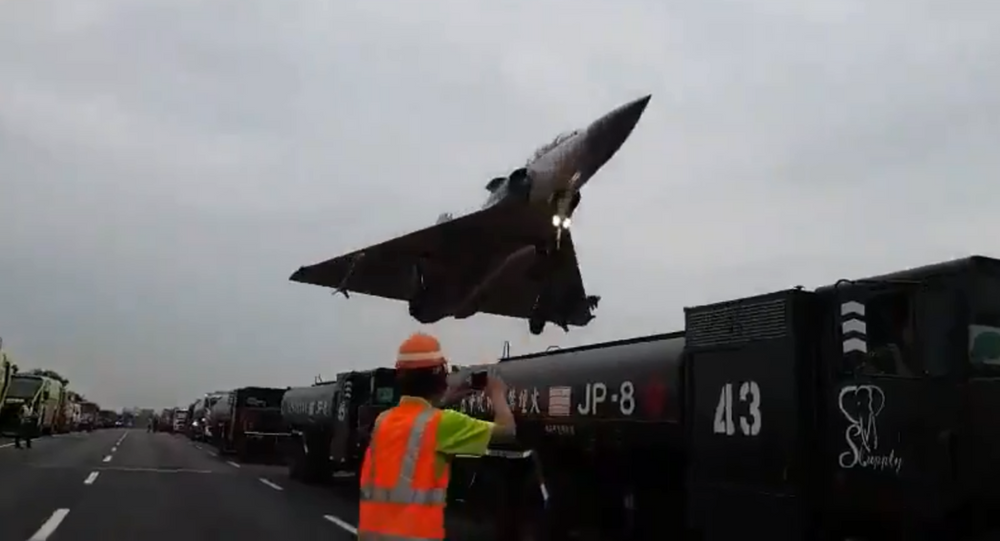 Taiwan's annual Han Kuang military exercise forced the partial shutdown of the island nation's Sun Yat-sen Freeway earlier this week so that participating air force servicemembers could demonstrate their ability to use the motorway as an emergency airfield.

The wargames, which led to the closure of the freeway's Huatan section, showed off the service's ability to land, refuel and rearm jets on the highway in the event that the nation's military bases were taken over, particularly by Chinese forces.

According to Taiwan News, the F-16V Fighting Falcon, a Mirage 2000-5 multirole fighter jet and the Indigenous Defensive Fighter took part in the military drills alongside the E-2K Hawkeye airborne early warning and control aircraft. Roughly 1,600 servicemembers participated in the drills.

Prior to the drill, officials removed more than 1,300 median barriers, 111 street lights and 77 road signs as a precaution.

​"There are only a few military air bases [in Taiwan], which would become prime targets in the event of an attack," Air Force Colonel Shu Kuo-mao told reporters. "The highway drill is necessary, as highway strips would be our priority choice if the runways are damaged during a war."

Aside from the highway's Huatan section, there are only three other sections that are designed to be used as a possible emergency runway — the Minxiong, Madou and Rende sections. According to Taiwan News, the island nation has held drills on every one of these sections, with the last exercise taking place in 2007.

​The exercise comes as relations between Taiwan and China have grown increasingly tense, with Chinese President Xi Jinping stating earlier this year that he has not ruled out the possibility of using force to unify Taiwan with mainland China, which sees the island nation as a wayward territory.

Taiwanese President Tsai Ing-wen spoke to the matter of increased Chinese patrols near Taiwan, telling reporters that "[China has] caused a certain degree of threat to regional peace and stability." She went on to stress that Taiwan must "maintain high vigilance" for the time being.

The Han Kuang exercise has also seen Taiwanese officials initiate anti-invasion drills on the island's beaches along the southern coast and test emergency air raid systems, which include text messages being sent nationwide.