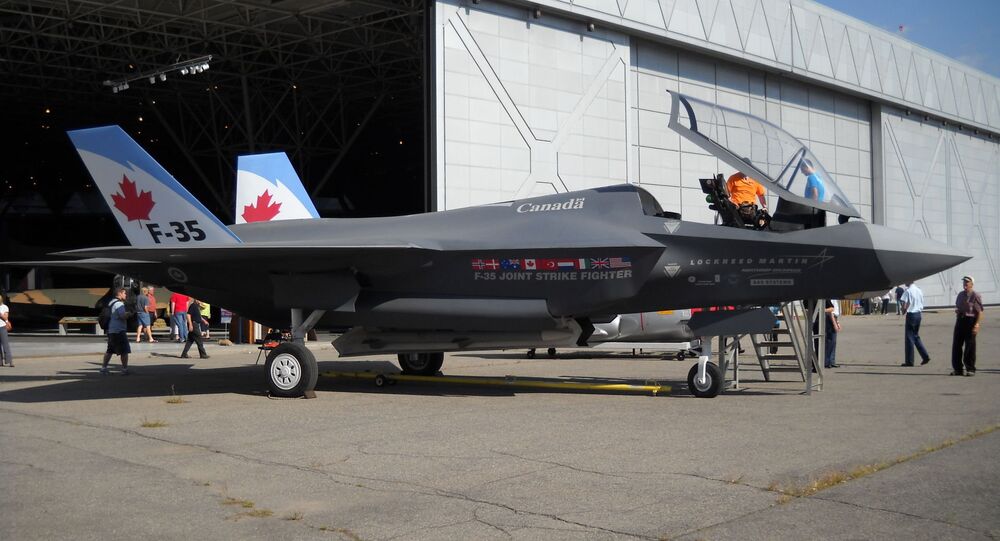 Earlier, Washington voiced its dissatisfaction with competition rules imposed by Ottawa on potential bidders for Canada's next-gen fighter jet, and threatened to not to allow Lockheed to bid unless the country changes the rules.

Canada has dropped the provisions of its Industrial & Technological Benefits (ITB) Policy requiring foreign weapons manufacturers to invest an amount of money equal to that of arms contracts they receive back into the Canadian economy following a US complaint, a source in the Canadian government told Reuters on Thursday.

"The US government told us they were unable to offer contractual guarantees of economic benefits," the source said. "A bidder that is not willing and able to sign a contract and guarantee them (the benefits) can still bid and still be competitive but they will get less points in the economic benefits category," the source added.

© AFP 2020 / JEFF J MITCHELL / GETTY IMAGES NORTH AMERICA
US Mulls Booting Canada From F-35 Programme, Denying Delivery of Jets Over Policy Dispute – Report
The change of heart comes after the Pentagon office in charge of the F-35 programme informed Ottawa last year that Lockheed would not take part in the bidding process for Canada's next-gen fighter procurement process unless Canada changed the ITB rules, which were said to contradict industrial benefit rules of the consortium of countries developing the plane.

The concession comes amid the Canadian Air Force's apparent desire to see Lockheed Martin remain in the running for the C$15 billion to C$19 billion ($11.1-$14.1 billion US) contract for the purchase of 88 new fighter jets.

Under Ottawa's criteria, the planes' performance characteristics make up 60 per cent of the points on a 100-point scale, with price tag and proposed commitments to invest in the Canadian economy making up 20 percent apiece.

Other manufacturers, including Boeing, Airbus and Saab are expected to compete with Lockheed, offering up their Super Hornet, Eurofighter Typhoon and Gripen aircraft, all of the 4++ gen aircraft.

Canada launched the competition for the purchase of 88 new fighters in December 2017, with the contract expected to be rewarded in 2022, and delivery expected to begin in the mid-2020s.

© Photo : Public Domain / Robert Sullivan
Warsaw ‘Not Far Away’ From Buying US F-35s - Defense Minister
The move to procure the planes via a bidding process follows a scandal which rocked Prime Minister Stephen Harper's Conservative government. After Ottawa publicly committed to purchase 65 F-35s in 2010, Canada's auditor general published a report in 2012 criticising the decision, alleging that Ottawa had been misinformed regarding the plane's final cost, and voicing concerns about a perceived lack of fair competition and transparency. The procurement was dubbed a national "scandal" in the media, prompting Ottawa to backtrack on its commitment to buying the planes.

Canada was one of nine nations which took part in the development of the F-35, with Canadian firms estimated to have earned over $1.3 billion in parts contracts since 2012.

The Lockheed Martin F-35 Lightning II fifth-generation stealth fighter is the most expensive weapons program in history. In addition to its staggering $1.5 trillion programme cost, the plane has been criticised for a plethora of glitches and design flaws which continue to plague it over four years after introduction into the US military in 2015. Last week, a report by the Government Accountability Office, a US government watchdog, found that a lack of spare parts prevented America's fleet of F-35s from flying more than 27 per cent of the time. Earlier this year, another watchdog complained that the US Navy's F-35s were nowhere near operational status, unprepared "to face current or future threats" and potentially dangerous for personnel operating them.

Navy: US Deploys Warships to Japanese Base to Support Marine Version of F-35 Jet