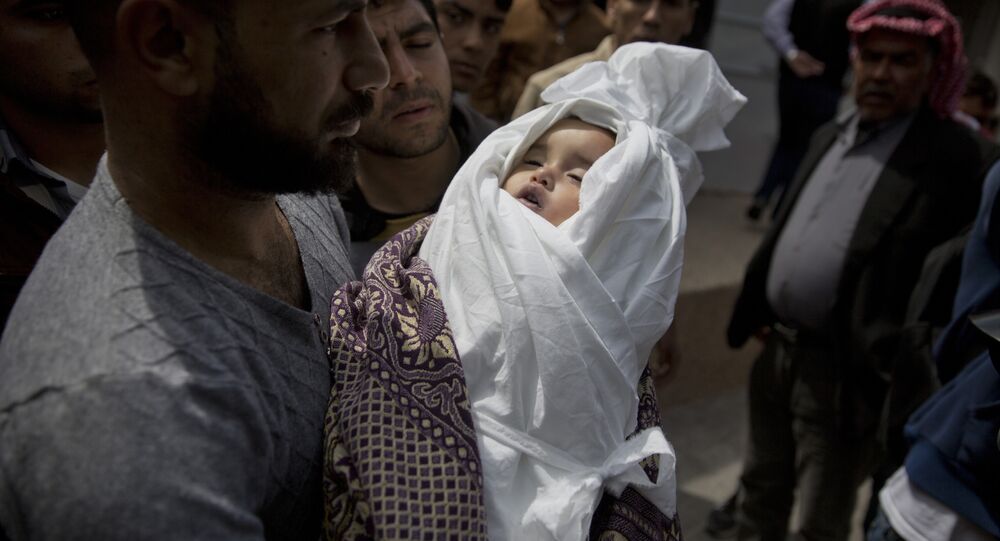 Numbers of the dead are rapidly rising in Israel and Gaza as both entrench for new battles.

© REUTERS / Mohammed Salem
Twitter Refuses to Allow IDF to Post Updates on Missile Barrage From Gaza Strip
At least four Israeli civilians have been killed by rockets fired from the Gaza strip while a minimum of 19 Palestinians have been reported killed in retaliatory strikes, according to Sunday statements from both officials in Gaza and the Israeli military.

A new surge in cross-border fighting has rapidly resulted in many new dead, according to reports cited by Reuters.

"Massive strikes" against Gaza have been ordered by Israeli Prime Minister Benjamin Netanyahu in what has become the most violent conflict between the warring neighbor nations since November 2018.

The Israeli Defense Forces (IDF) reported that over 600 rockets as well as many other projectiles had been fired from Gaza into cities in southern Israel since Friday, according to Reuters.

© AP Photo / Tsafrir Abayov
Iran Blames US Support for Israel's "Savage Attack" Amid Gaza Escalation
IDF sources claim to have fired on 260 targets said to be housing Gaza militants, while officials in Gaza noted that Tel Aviv had so far killed at least 27 people since Friday, including 14 civilians.

Israel reported that it had killed Hamas military commander Hamed Ahmed Al-Khodary, a figure purported to have been responsible for arranging for the transfer of cash from Tehran to armed Gazan fighters, according to Reuters. Khodary's death was confirmed by Hamas.

Schools and other institutions are closed on both sides of the border region, while Tel Aviv has shut off fuel transfers from a nearby natural gas field, as the area is said to be within range of Hamas artillery and missiles. Fuel imports into Gaza from Israel have also been halted, according to reports.

In two weeks Israel will host the Eurovision Song Contest in Tel Aviv, a city noted to be within range of Hamas weapons, according to Reuters.

The escalation of violence has also coincided with the onset of Ramadan, a high holy Muslim month beginning on Monday. Ramadan is a traditional time of prayer and fasting in Islam.