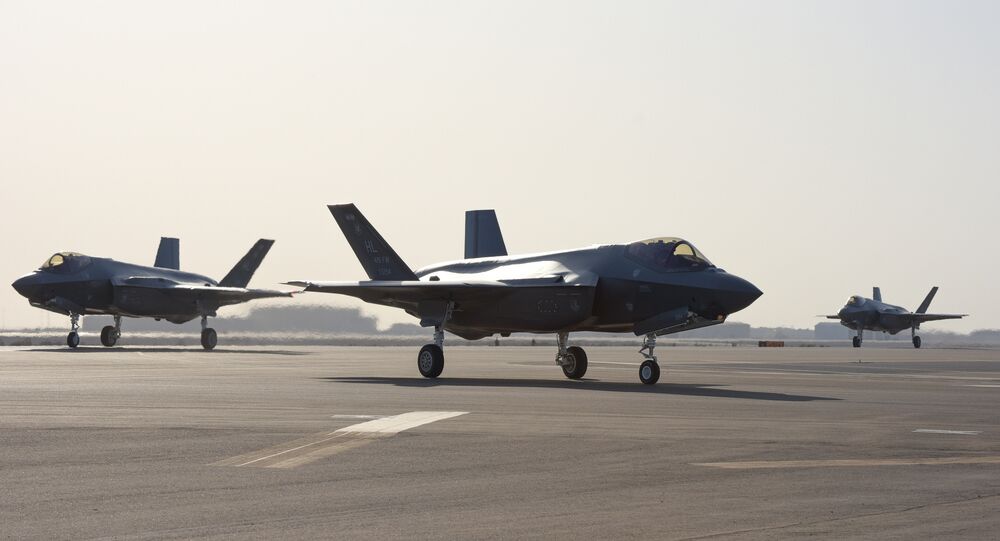 The mission was the first combat deployment of the plane's F-35A modification, and just the third deployment of any variant of the F-35 following their use by Israel for strikes against Syria in May 2018 and the US Marine Corps in Afghanistan last September.

"The F-35As conducted the airstrike using a Joint Direct Attack Munition to strike an entrenched Daesh tunnel network and weapons cache deep in the Hamrin Mountains, a location able to threaten friendly forces," AFCENT reported, providing photos of the mission on its official twitter account.

The military did not provide any information as to whether or not the strikes were successful. The strikes were part of an offensive by Iraqi security forces with US air support to prevent Daesh's resurgence in the region.

The Air Force deployed several F-35As ordinarily based at the Hill Air Force Base in Utah to the Al Dhafra Air Base in the UAE in mid-April, with these planes said to have been used in Tuesday's strikes.

AFCENT emphasized that the strikes were the first-ever "combat employment" for the F-35A, with Marine Corps F-35Bs conducting an airstrike in Afghanistan last year. Israel is reported to have employed its own F-35s in strikes in Aleppo, Syria on at least two occasions starting in May 2018.

© Photo : Public Domain / Robert Sullivan
Warsaw ‘Not Far Away’ From Buying US F-35s - Defense Minister
While the Air Force boasted about the plane's stealth capabilities in its press release, The Drive contributor Tyler Rogoway said the configuration of wingtip pylons and radar reflectors on the planes' fuselage giving off a larger than normal radar signature during Tuesday's strikes was an indication that the Sidewinder-equipped F-35As weren't flying in stealth mode over Iraq, given the absence of any sort of enemy air force or advanced air defences.

The F-35 is the most expensive defence project in history, with a projected total cost of $1.5 trillion over its 55 year lifespan. In addition to cost, the plane has been criticised for a plethora of glitches and suspected design flaws, many of them believed to be dangerous to pilot safety. Last month, Japan, the second-largest buyer of F-35s after the US itself, temporarily grounded its entire fleet of F-35A jets after one of the planes was lost in the waters off of northeast Japan during a routine training flight.

Navy: US Deploys Warships to Japanese Base to Support Marine Version of F-35 Jet