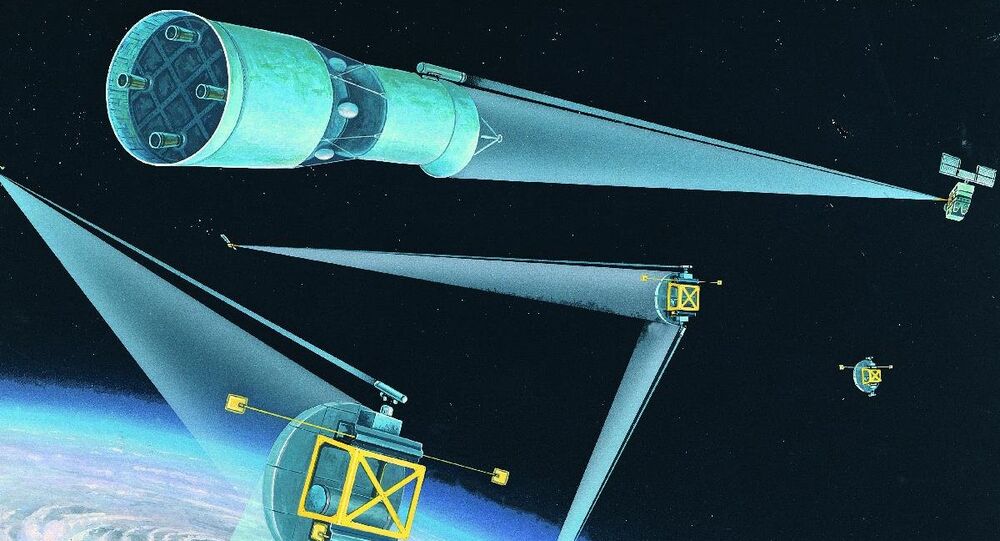 The Trump administration has committed considerable resources to expanding the scope of the US' modernisation of its nuclear forces, proposing a new 'Space Force' branch for the armed forces and withdrawing from the Intermediate-Range Nuclear Forces Treaty (INF), a key arms agreement signed at the twilight of the Cold War to secure peace in Europe.

US efforts to create a global missile defence system are aimed at reaching "strategic superiority" and neutralising the strategic deterrents of possible US adversaries like Russia and China, Lieut. Gen. Viktor Poznikhir, Deputy Chief of the Russian General Staff's Main Operations Department, has said.

Speaking at a security conference in Moscow on Wednesday, Poznikhir warned that "the deployment of missile defence systems near our borders creates a powerful strike potential for the US, enabling it to carry out a surprise nuclear missile strike on Russia."

© AP Photo / Charlie Riedel
US Inexplicably Halts Disclosure of Info on Size of Nuclear Arsenal
According to the general, US plans "to create a space-based layer of anti-missile systems to hit ballistic missiles at early flight stages" were "of particular concern, basically reviving the 1980s concept of 'Star Wars'," a missile defence program unveiled during the Reagan era.

In its own time, Star Wars, or Strategic Defence Initiative, was decried as a dangerous program designed to provide the United States with a first-strike capability and to deny Soviet strategic forces their retaliatory potential, thereby increasing the danger of war.

Poznikhir warned that "the deployment of a global [US] missile defence system is leading not only to the destruction of strategic stability, but to the further destabilisation of the security situation in various parts of the world."

Specifically, the general noted that "a negative factor for regional security is the heightened threat to states where US missile defence components have been deployed or are set to be deployed. These countries must understand that missile defence systems' information and interceptor components are the primary targets for destruction" in the event of war, he said.

Poznikhir added that the use of missile defence systems was associated with the threats of prolonged radioactive contamination, not only of the territories where the systems are deployed, but of neighbouring countries which have nothing to do with these systems.

© AFP 2020 / DANIEL MIHAILESCU
US Army personnel cleans the red carpet ahead an inauguration ceremony of the US anti-missile station Aegis Ashore Romania (in the background) at the military base in Deveselu, Romania on May 12, 2016

Ultimately, the senior officer suggested with the Pentagon's plans to develop low-yield nuclear warheads for use by its Tomahawk cruise missiles, the US threatened to thrust the world into a new nuclear arms race. "The possibility of using such nuclear warheads by the Pentagon stimulates the desire of other countries to acquire similar weapons. As a result, a new arms race is being whipped up," Poznikhir warned.

© AP Photo / Phil Sandlin
Germany's Top General Calls for New INF Treaty With China, Russia, US
The US formally began the six-month procedure to suspend its obligations under the INF Treaty in February. The arms agreement, which bans ground-based missile systems in the 500-5,500 km range, was signed in 1987, and committed Moscow and Washington not to develop, manufacture or field such weapons. Earlier this month, Russian President Vladimir Putin warned that the US withdrawal from the INF was a "direct step toward the destruction of the entire system of agreements in the field of international security."
...
Reddit
Google+
Blogger
Pinterest
StumbleUpon
Telegram
WhatsApp
412